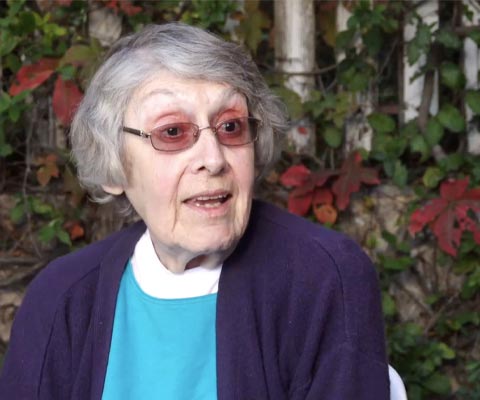 When Arlyn Berman joined Hadassah in Monroe, N.Y., more than 30 years ago, she never imagined that the hospital she was supporting would one day save her life.

The New York nurse and life member understood the importance of Hadassah and volunteering. She attended the chapter’s annual donor luncheon, raised funds and wrote the chapter newsletter.

After Arlyn was widowed, she decided to join her son Hal, daughter-in-law Gayle, also a life member, and her grandchildren, who were all living in Israel. She loved living with them in Efrat, and she enjoyed their holiday celebrations and the music that fills their home. She kept in touch with her Monroe Hadassah friends and others by sending Hadassah cards.

Her life was idyllic until COVID-19 struck.

Before Rosh Hashanah, Hal's accountant contracted the coronavirus and called to tell his clients. Then Hal felt sick. Gayle was also infected but had a light case. Arlyn, 84, was, not surprisingly, the sickest.

“I took care of her at home until I couldn't anymore,” said Gayle, who is an opera singer and voice coach.

On Saturday night, October 4, Hal called an ambulance for his mother. The driver told them they were going to Hadassah Hospital Ein Kerem, “the only place,” he said, “still willing to take all patients no matter how sick.”

Hal went with his mom but wasn't allowed to go up to the secluded Outbreak Units in the Round Building at night. With the evening's intake, they were up to some 150 patients.

“It was scary and upsetting to say goodbye and part from my mom, not knowing which way this was going,” said Hal, a former director of the Western Massachusetts Jewish Federation in Springfield, Mass. He was relieved when the next morning, the family received the first of their daily calls updating them on Arlyn's condition, checking on her usual medications, apprising them of any changes. To their surprise, they were invited to visit. Hal and grandson Micha were suited up in layers of protective gear.

“We were delighted that she recognized us in our astronaut suits,” Hal reported. “We're so grateful that the staff would take the time to teach us how to get dressed and to supervise our taking off the suits, which we learned is the most dangerous part in terms of contagion.”

But now she's home in Efrat with her family celebrating Hanukkah.

“Their visit is one of the few moments I remember from my hospital stay,” Arlyn says. “I have no memory of the rest of my hospitalization. COVID-19 is such a strange and frightening virus. I even needed to learn to walk again. I always knew Hadassah was saving lives, but I never thought it would save mine. When I light candles I think of all the Hadassah miracles, including my personal one.”