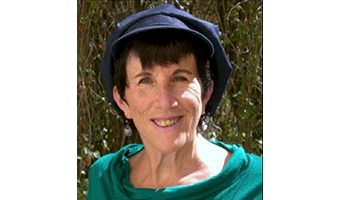 This Independence Day, Israel's 69th Anniversary-cannot be separated from celebration of the re-unification of Jerusalem 50 years ago. For Hadassah, this also meant the reunification of our hospitals, with the return of our Mount Scopus campus. In June 1967, Hadassah Hospital DG Dr. Kalman Jacob Mann sent a joyful telegram to Hadassah headquarters in New York: Scopus Regained.

In preparing for our jubilee celebration of that moment, including a re-enactment of the returning of the keys on May 25, I've been gathering stories small and large that relate to our past. Here's one I love.

Yaakov "Yaaki"  Perlstein is only 16 and already a leader in the Hagana, the pre-State military force that will become the IDF. His job today is to train high school students from the prestigious Rehavia Gymnasium.  A brunette catches his eye. She is so serious about 'right-left, left-right.' "Who is that?" he asks a friend. "Please introduce me to that girl!"

Her name is Tamar Perehodnik. The bad news is that she already has a boyfriend. But Yaaki Perlstein is determined and history comes to his aid. On what is called Black Saturday, the British Mandate soldiers divide Jerusalem into northern and southern sections in their effort to defeat the Jewish uprising and find cashes of arms. The impassable barrier means that  Tamar's boyfriend in the northern part of the city can't get  through to court her.  In a time of few phones, Yaaki uses the  two weeks of separation to steal away Tamar.

71 years later, they're still together. They're both 87, living in an apartment in the Arnona neighborhood of Jerusalem with a stunning view of the Jerusalem they so love.

There is no way to separate their romance from Jerusalem's history, nor Hadassah's.

"We were all living at home and there wasn't much privacy," says Yaaki. "While courting, we went to a field with another couple to 'make out.' Three terrorists appeared, trying to drag Tamar to their village. I fought them off, but when I bent over to pick up a rock, I was stabbed twice in the back."

He told his friend to get the girlfriends home, and found a bus parked at the last stop of the local line. Inside was the driver, undressed and making love to his girlfriend. "I kicked out the girlfriend and insisted the driver take me to the Hadassah Clinic on Solel Street in downtown Jerusalem. He was furious, but then I turned around and he saw the knife wounds and blood on my back, and stepped on the gas."

At the Hadassah clinic, Yaaki was bandaged, stabilized and sent him to Hadassah Hospital on Mount Scopus. "I got a warm welcome from my sister, a nurse there."

Tamar insists it wasn't just his bravery that won her heart away from her previous suitor. "He was so handsome," she says

Tamar was registered to begin Hadassah's nursing school in Jerusalem.

One day, she decided to go to Tel Aviv to see Yaaki and took a convoy over the dangerous road to get there. "I hadn't told my parents,"

she said. "Remember, few phones. We met the convoy coming towards Jerusalem on the way. I saw an acquaintance and asked her to inform my parents."

It turned out to be the last convoy taking that route. Jerusalem was cut off. Tamar was stranded in Tel Aviv and wound up going to nursing school in Tel Aviv where Hadassah also had a hospital.

In the War of Independence, Tamar's older brother Bezalel, a graduate of the Technion and married to a new immigrant who was the only member of her family to survive the Holocaust, was killed in the fighting for Haifa.

Eventually, Tamar and Yaaki returned to Jerusalem and got married.

By then, Hadassah's Mount Scopus hospital was no longer in use. It had been evacuated in  1948 and was scattered in temporary housing in town where Tamar, now a nurse, did research on heart disease with an international team that had come to Hadassah Hospital.

As an officer in the IDF, Yaaki was sent to take part in the  rotating forces which guarded Hadassah's abandoned Mount Scopus  campus from 1948-1967. "I had served there also in the Hagana  where we did our training. I came back as a member of the Jerusalem  battalion."

In addition to his military service, Yaaki became involved in the building supply business. He and Tamar had three children, two sons and a daughter. Of course, they named a son after Tamar's brother Bezalel who had never had a chance to have his own children.

Then in 1967, Hadassah Mount Scopus was returned to Hadassah.

"We were overjoyed to hear that the hospital was back in our hands and that the key had been returned to HWZOA," says Tamar.

When Mount Scopus reopened in 1975, a fellow nurse encouraged Tamar to transfer there with her ."I became a staff nurse and worked there for decades. Even though I've been retired for 22 years, I still go to visit and am warmly greeted by staff there. It became my second home. Even today-50 years after the reunification of Jerusalem-I walk the halls of Hadassah Mount Scopus and feel the special feeling of devotion that we all had to that place."

He and Tamar have an additional reason to be proud:.

Daughter Dr. Miri Rom is the dean of the Henrietta Szold - Hadassah-Hebrew University School of Nursing, making sure that the next generation of Hadassah nurses carries forth the professionalism and compassion of those who came before them and brought modern medicine to Israel.

When romance and Zionism meet!

Hadassah, the Women's Zionist Organization of America Jerusalem friend me on fb!