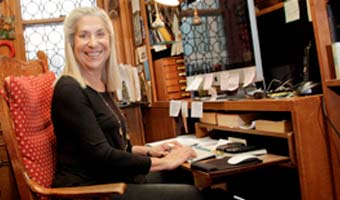 Get to Know our #HadassahConv2016 Speakers: a Q &A

Hadassah: As a Jewish woman who helped found (then grow) a vibrant, diverse women's rights movement in America, what do you wish more Jewish women would do to advance gender equity in America?

Letty Cottin Pogrebin: I wish more Jewish women would own their own views more forcefully and publicly and would raise their voices more assertively on all issues, particularly those that are important to women. I wish more Jewish women would be less "well-behaved" when it comes to the struggle against the sexism and patriarchal tendencies of the Jewish community and against right-wing backlash, especially the Conservatives' erosion of reproductive rights. Every society honors its live conformists and its dead troublemakers. Each Jewish woman should strive be to become a live troublemaker and a strong activist on behalf of gender justice.

Tell us about the power of words to change minds.

Of course words have the power to change minds but only if the minds aren't closed, clamped shut, and unwilling to listen to opposing views. What worries me most about the American Jewish community today is the increasing tendency of certain "leaders" to silence those of us who love Israel and care deeply about its future but may not agree with the policies of its current prime minister and his government. I find it curious that most Jews are willing to criticize the U.S. government, Congress, and courts; we're willing to criticize developments in France, China, or Nigeria. Yet many of us don't feel free to use the power of words to comment on developments in Israel, the Jewish homeland, and the nation to which we are most deeply attached. For example, I think it's wrong to muzzle idealist young Jews who support BDS (because the peace process has stalled, not because they're "self-hating Jews"), I wish more Jews, especially Jewish women, were secure enough to listen to others and then use the power of words to counter those arguments with which they disagree.

What do you value most about Hadassah?

I admire Hadassah for its unapologetic devotion to women's rights, dignity, equality, health, and well-being. And for its support of Hadassah Hospital, an institution that, thankfully and admirably, cares for the sick and injured without regard for race, religion or nationality.

Join the quickly growing list of more than 700 attendees already registered for the Hadassah 98th National Convention in Atlanta, our most exciting—and powerful—yet. Sign up now. There will be speakers on gender equity in medicine, Israeli security, women's leadership, and so much more.

Letty Cottin Pogrebin is a founding editor of Ms. magazine, an award-winning writer and lecturer and the author of 11 books, most recently the novel “Single Jewish Male Seeking Soul Mate.” Ms. Pogrebin won an Emmy for her work as the editorial consultant on Free to Be, You and Me. Her articles have appeared in numerous publications including The New York Times, Washington Post, Time, and The Nation. She has had a column in Moment magazine since 1991 and for ten years contributed "The Working Woman" column to The Ladies Home Journal. A past president of The Authors Guild and Americans for Peace Now, she is a co-founder of a dozen or more activist organizations including the National Women's Political Caucus, the Ms. Foundation for Women, two Black-Jewish dialogue groups, and several Palestinian-Jewish dialogues. She serves on the boards of the Brandeis University Women and Gender Studies program, and the Harvard Divinity School's Women in Religion program. Ms. Pogrebin lives in New York with her husband. They have three grown children and six grandchildren.