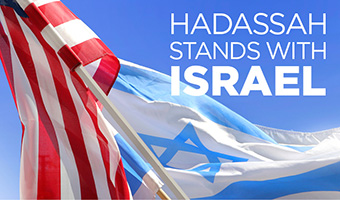 Last night in Tel Aviv, four Israelis were murdered when two Palestinian terrorists opened fire in the Max Brenner restaurant in Sarona Market. Hadassah is outraged, and we urge you to join us in publicly condemning these attacks.

We stand in solidarity with the people of Tel Aviv and Israel as we condemn these heinous attacks which took the lives of innocent civilians.

As our hearts ache for the victims and their families, we are encouraged to see so many in the international community join us in condemning these egregious acts of violence, including Secretary-General Ban Ki-moon, who on June 8 called upon the Palestinian leadership "to live up to their responsibility to stand firmly against violence and the incitement that fuels it.

Hadassah, The Women's Zionist Organization of America, asks the entire international community — including the Palestinian leadership — to join us in condemning the ongoing violence.

Add your power to ours: Advocate

We ask our members and all friends of Israel to join us in urging elected officials to continue to pressure the international community to condemn the ongoing violence. You can take action here, and sign up for future action alerts.

Add your power to ours: Post on Social Media

Join Hadassah's social media campaign in solidarity with the people of Israel. Show the world that Israel does not stand alone. We hope you'll share our Facebook and Twitter posts. And if you've visited Israel, post a picture of yourself or your family in Israel with the hashtag #StandWithIsrael.