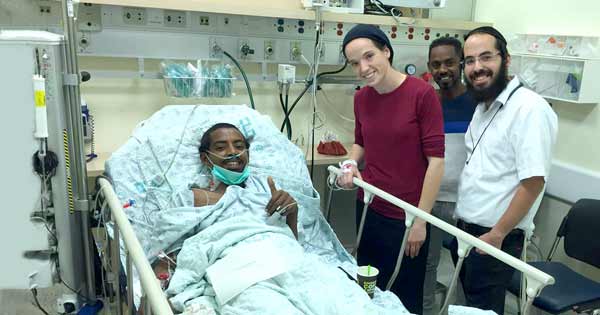 When it comes to donating an organ to save a life, Israelis rank near the top of the global rankings for living donors. And Hadassah Hospital Ein Kerem is home to many of the transplant surgeries.

As Wendy Elliman reports in her Hadassah Medicine column in the November/December 2021 issue of Hadassah Magazine, about 250 Israelis choose to donate their kidneys each year. This is quadruple the number of live donations as there were a decade ago.

“What do you say to someone who saves your life?” asks Darja, a kidney transplant recipient who, as a toddler, immigrated with his mother to Israel from Ethiopia. “No words are enough.”

Darja’s donor is Esti Lerer, a counselor for at-risk youth and the Hasidic mother of three children under 8 years old. “It was something I decided when I was 16, when my best friend’s father died because there was no kidney for him.” Esti even told her future husband on their first date that she planned to register to become an organ donor at age 23, the youngest it is legally permissible to become a donor in Israel. “Giving Darja my kidney is among the most joyous things I ever did,” She says.

Dr. Abed Khalaileh, one of seven sons born to a Palestinian Israeli family in Jerusalem, is director of Hadassah’s Solid Organ Transplantation Unit. He typically performs two scheduled liver or kidney transplants each week,f as well as an emergency transplant or two. Like every other transplantation center in Israel, Hadassah has two coordinators, one who reaches out to families of brain-dead patients to see if they would be willing to donate their family member’s organ, and another coordinator who facilitates live donations. Hadassah Ein Kerem nurse Kyrill Grozovsky handles the “deceased donations.” He recalls the young Muslim couple who were mourning their 3-year-old daughter who died after a car accident. “I spoke as much with the grandfather and the imam as with the child’s parents,” he says. “The imam’s approval tipped the balance in favor of donation.”

Grozovksy emphasizes, however, that the number of donations still does not meet the needs for donors. “Donating organs should be as much a social norm as stopping at a red light,” he says.‍

Read the full article to meet the devoted health care professionals and donors who make it all possible.