Upon the Murder of Massachusetts Teen, Ezra Schwartz 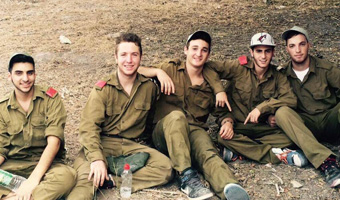 Several representatives from the United States Embassy and the US Consulate attended a memorial service at Ben Gurion Airport for Ezra Schwartz, the Massachusetts teenage student who was killed in a recent terrorist attack. Intended as a private service for close friends and family, the memorial gathering swelled into the hundreds--perhaps more than a thousand.

Many of the young man’s classmates and high school friends from Brookline, MA could be seen sobbing uncontrollably. The school principal where Ezra was studying spoke passionately, interweaving Biblical references, but barely able to deliver his text.

In the center of the main hall was an ad-hoc monument in Ezra’s honor; among the paraphernalia was a New England Patriots ‎jersey.

A Yeshiva student committed to community service, Ezra had just finished delivering food to lone soldiers when his life was taken from him.

As they have done since the terrorist attack, Consular staff continued to assist the family. Before takeoff of the flight carrying Ezra’s body home, HE Daniel Shapiro, Ambassador from the United States to Israel, met privately with a core group, including Ezra’s family.

At the service, an Embassy representative had read a message on behalf of the United States government and Ambassador Shapiro:

“It is with deepest regret that I am unable to be with you in person (at this service). With the most profound sadness, on behalf of President Obama, Secretary of State John Kerry, and the American people, I want to express the sorrow, pain, and anger we all feel over losing Ezra Schwartz, Y’hi zichro baruch (May his memory be for a blessing).

Innocent of any wrongdoing, he was taken cruelly from his family and his friends by an act of terror, which we condemn with all our strength. To his great credit, Ezra chose to spend a year in Israel--learning, studying, growing, and deepening his own personal relationship with this place. Whether he knew it or not, he was also strengthening the bonds between the United States and Israel. Now, in the most tragic way, his death forms an additional bond between our peoples. With broken hearts and deep love, tonight we send Ezra home to his family. May God comfort them among the mourners of Zion and Yerushalayim, and may Ezra’s memory always be for them a blessing.”