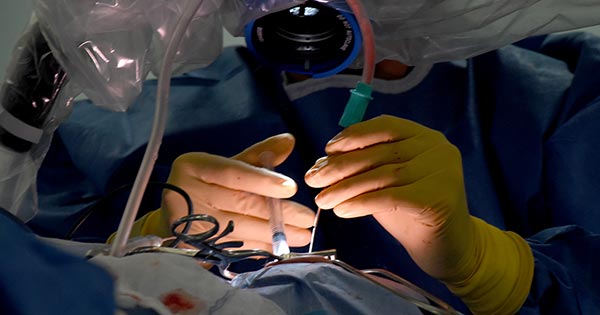 Headaches are common in children, but when their 3-year-old son Noam’s temperature spiked over 100°F and wouldn't go down with either baths or over-the-counter medications, Sarit and Ran* took him to the Pediatric Emergency Room at Hadassah Hospital Ein Kerem.

Usually a lively and talkative little boy, Noam was instead quiet and drowsy. Throughout the examination, he was busy playing games on his tablet.

Sarit suspected he'd picked up a virus at nursery school, but blood tests revealed that Noam had a bacterial infection. When the doctor examined him, Noam's neck appeared a little stiff. A lumbar puncture was necessary to check Noam’s cerebrospinal fluid to rule out meningitis, an infection of the protective membranes that surround the brain and the spinal cord.

To the parents' surprise and distress, the results came back positive. Noam would have to be hospitalized and placed on antibiotics immediately. In Hebrew, meningitis is called “infection of the brain lining,” a rather frightening name. But the Hadassah staff assured them that they had come in time, and Noam would get better soon.

And he did. Noam's headache faded and his temperature fell, but Sarit noticed that Noam didn’t seem to be hearing her. At first, she thought he was just focused on his tablet and not listening, but she was concerned that she wasn’t getting answers to her questions. Once a chatterbox, Noam also stopped talking.

One might expect that a 3-year-old would tell his parents if he suddenly couldn't hear, but Noam didn't complain. Nonetheless, he was sent for two hearing tests, first a behavioral one and then an auditory brainstem response test to evaluate the functioning of his inner ear and hearing nerve.

The tests revealed that Noam was totally deaf.

“In such a case we can sometimes perform a cochlear implant to restore hearing, but we have to work very fast,” explains Dr. Michal Kaufman, director of Hadassah’s cochlear implant program and a senior head and neck surgeon specializing in otology and neurotology. “The parents, like most people,” she says, “had no idea what a cochlear implant is. It’s a small electronic device that electrically stimulates the cochlear nerve, the nerve responsible for the ability to hear. The implantation surgery is a complicated procedure requiring CT scans, an MRI and the ordering of the appropriate implant for each particular patient.”

On hearing the news, Dr. Kaufman relates, “The father burst out in tears and the mother responded with total shock. They'd come to the hospital thinking their child had a virus and now had to make a decision about surgery with no time to hesitate.”

Meningitis can cause calcification in the ears, which could prevent a child from hearing even with a cochlear implant. Every day the surgery is delayed increases the risk of permanent deafness.

After many hours of consulting with Dr. Kaufman, Sarit and Ran overcame their fears and agreed to the surgery. In the underground operating theater in Hadassah’s Sarah Wetsman Davidson Hospital Tower, Dr. Kaufman readied the optical microscope. She made a small incision behind Noam's ear and then another one in the portion of skull bone where the internal device is placed. Then she created a small opening in the cochlea—the snail-like hearing part of the ear—so that the implant’s electrode could be threaded into it.

Dr. Kaufman notes that operating in the ear canal of a 3-year-old is always a challenge, but, to her dismay, instead of the clear liquid usually found in the cochlea, Noam's right ear was filled with a viscous, cloudy fluid caused by the meningitis, which would make the placement difficult and could impede the passing of signals through the cochlea. The fluid in his left ear was even more viscous and cloudy.

Despite the difficulties, Dr. Kaufman's years of experience with complex cases enabled her to implant the electrodes successfully in both ears. The four-hour surgery was completed, but there were still many steps ahead.

A sound processor had to be fitted behind Noam’s ears to capture sound signals and send them to a receiver implanted under the skin behind the ear. The receiver eventually sends the signals to the inner ear, stimulating the auditory nerve, which then directs them to the brain.

The inner and outer parts of the cochlea, however, can't be connected for two weeks. Consequently, for two fraught weeks, the family and the doctor waited. Noam couldn't hear and didn't speak.

Then the day came. Sarit, Ran, Dr. Kaufman and a Hadassah audiologist held their breaths as the wires were attached. Would the signal come through?

Noam's giant smile answered that question. For the first time since coming to the hospital, Noam no longer wanted to play with his tablet. His parents’ eyes filled with tears as they heard his familiar voice.

Noam returned to nursery school and joyfully joined his friends at play. It took a month for the hearing in his left ear to return, but now he hears with both ears. ”His parents made a good call by going to Hadassah’s Pediatric Emergency Room where the team suspected meningitis from the beginning and treated it fast,” comments Dr. Kaufman. “Likewise, we were able to recognize the loss of hearing and to arrange the surgery before it was too late. We were in a race against time. The parents were fearful, but they trusted us. We have the equipment and the experience to treat the toughest cases.”

Noam celebrates two birthdays every year now—one on the day he was born and the other on the day his hearing was restored.

*The names of the parents and child have been changed at the request of the family.