Tsofen, founded by Sami Saadi and Smadar Nehab, is an Arab-Jewish initiative that has cracked the code for integrating Arab Israelis into Israel’s booming hi-tech industry. 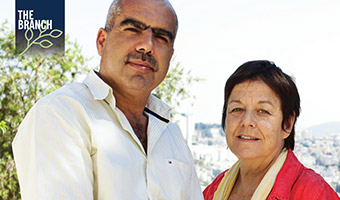 The Code Breakers
By Dina Kraft

This episode takes me to Nazareth, Jesus’ boyhood home. Its skyline is dotted with church towers, minarets and the domed Basilica of the Annunciation, where Christian tradition says Mary was told by the angel Gabriel she would have a child. Tour buses carrying Christian pilgrims from around the world clog its hilly streets and visitors spill throughout its downtown, buying souvenirs and sampling pastries.  It’s the largest Arab city in Israel, home to about 77,000 Christians and Muslims.

Amid its celebrated history, a new story is also emerging from Nazareth: the city is becoming a hub for tech companies. It’s something of an economic and social revolution in a country where Arab tech workers have been vastly underrepresented in Israel’s hi-tech industry, even though tech is a major engine of the country’s economy and Israel is known around the world as a tech-powerhouse.

This growing integration of Arab tech workers has taken place in the past decade, with credit going at least in part to an organization called Tsofen. It’s an innovative Arab-Jewish initiative in Israel. Tsofen is Hebrew for encrypted code. And it’s precisely that secret for integration of Arab engineers into the Israeli tech workforce that Tsofen was created to crack.

It was two people - Sami Saadi and Smadar Nehab, two of the founders of Tsofen, along with a third partner named Yossi Coton, who helped create the first foothold of tech in Nazareth. Nazareth was chosen as a center of the Arab community in the Galilee, the region that is home to half of Israel’s Arab population.

Sami and Smadar grew up about 40 miles apart. Sami in what was then the small Arab village of Arabe, in the northern Galilee, and Smadar in a kibbutz in the Jezreel Valley. Sami still lives in the village that his family has called home for generations. Smadar is the daughter of German Jewish refugees who settled here shortly before World War II broke out. She now lives in Tel Aviv.

They joke that they were the perfect complements to each other in creating and carrying out the vision for Tsofen: Sami, an accountant and community organizer, brought deep roots and connections within the Arab community and Smadar, a long-time tech entrepreneur, brought an understanding of Israel’s tech scene and connections to it.

When I asked them what drove them and continues to drive them, Sami tells me: “I really believe that we should have shared society between Jewish and Arab together.  And we cannot do it without equal rights. We cannot do it with all the gaps between the two communities. And we have such a model. It will not solve all the issues between the Arabs and Jews,” he says, but it’s making an important start, one that has already made an impact.

Tsofen’s centerpiece is running training sessions for Arab engineers, most of them recent graduates, to help find work in the industry – giving them tips in the interviewing process and giving them real world experience running the kinds of projects they would be part of in tech companies. Even though Israel has a shortage of computer engineers and talks about bringing foreign engineers in to help fill the gap, a large percentage of Arab graduates from computer science fields still struggle to find work in the industry.

That’s for reasons that have less to do with conscious discrimination, and more to do with Israel being a place where Jews and Arabs have lived in fairly distinct social and economic orbits. Not unlike the United States, where women and minorities are vastly under-represented in the tech industry, tech culture in Israel is a world where connections matter. News about job postings are spread through social and professional networks of Jewish Israelis, many of whom know each other from elite tech units in the army. And there are cultural cues that Jewish Israeli employers and Arab workers misread about one another, further compounding the problem. Top Arab students are often encouraged by their families to go into what are considered more “stable” fields of law and medicine.

A shortage of computer engineers in Israel has led some in the field to search for workers from abroad, from countries like India. But Smadar says she’s astounded by that when there is so much untapped homegrown talent.

Describing Tsofen’s work she says: “The industry needs people. And we knew how to grow a core community.”  Also key to their strategy has been bringing tech to Arab cities and towns -- where both Jews and Arabs can work side-by-side, not just bringing Arab engineers to Jewish cities to work for tech companies there.

When Tsofen opened in 2008 there was barely a tech presence in the city. Now there are 50 tech companies, from start-ups to international companies like Microsoft and Amdocs. And the number of Arab computer engineers, all of them men, totaled 350 people. Today that number has leaped to 6,600, about a quarter of them women.

Smadar left the organization in 2015 to create a similar initiative for Bedouins in southern Israel. But she and Sami stay in close touch. They are, they both say, like family to each other.  She says of Sami:  “He’s my friend. [He’s] charismatic, energetic and for sure a fighter for equality in Israel.”

Sami says of Smadar: “She’s my good friend. She’s professional, a real pusher -- she can come up with a plan and run with it for the long haul.”

Go behind-the-scenes with host Dina Kraft: check out these photos from episode 15!