As the Israeli economy reopens, uncertainty continues. Host Dina Kraft takes us back into the lives of Jews and Arabs we met in earlier episodes to see how they're faring, and what's changed about the efforts that brought them together... 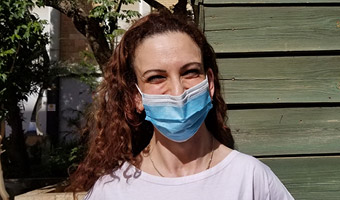 The Corona Chronicles
By Dina Kraft

Note: Israel is reemerging from its long COVID-19 hibernation. And so is The Branch podcast, sponsored by Hadassah, where I drop into the lives and friendships between Jewish and Arab citizens of Israel and Palestinians. Their work and lives span so many pockets of experiences here -- from health care and education to peace activism, culture, small businesses and more. So I thought the best way to launch a new season during these unprecedented times was to check in with some of those characters we met in the first season to see what lockdown was like for them what life is like now as the economy reopens, but uncertainty continues.

When I find my way back to the restaurant Shakshuk, in  Machane Yehuda, Jerusalem’s fruit and vegetable market, I spotted Mahdi Matur and Michal Zackai surrounded by empty tables, their faces glum. It  was the first day across the country restaurants and cafes were allowed to reopen.

“I had hoped for more,”  Michal said about the mere trickle of customers that first day. Michal is a Jewish Israeli who owns the restaurant and runs it together with Mahdi, a Palestinian cook from East Jerusalem.

For the past six years they had worked together until the shutdown shuttered the restaurant and the shuk around it. They missed the work and each other. So when shutdown restrictions began to ease, but before restaurants were allowed to open, they would come to the shuk to meet and catch up.

Lockdown was especially stressful for Mahdi. Without an income, he’d bolt up in the middle of the night, his mind racing about how he would ever afford to pay his mounting debts.

The sole provider in his family, he is now relieved to be working again. But he knows it’s a long road: “It will take a long time. It’s not simple; it won’t be easy. Not just for us, but for everyone."

From the shuk I traveled to the hills leading to Jerusalem to meet Amal Yusef, a nurse at Hadassah Hospital Ein Kerem who is an Arab citizen of Israel. She was coming off an eight-hour-shift.

Since we last met she has been promoted to deputy head of the hospital’s Dialysis Department. Her mentor and close friend, Mali Razon, a Jewish Israeli, suggested her for the job. Mali was recently diagnosed with cancer and is no longer working.

During the peak of the pandemic in Israel it was Amal’s job to select which one of her nursing staff would have to go into the COVID-19 wards to treat patients there who also needed dialysis.

She found it agonizing, describing it as sending her staff into the “fire” of the corona wards.

The Hadassah Medical Organization has been on the frontlines of fighting COVID in Jerusalem. During the peak of the crisis to date, some 100 patients a day were treated in Ein Kerem. When relatives were not permitted to say farewell to a dying loved one, nurses helped mediate final conversations through cell phones. In some cases, staff members, wrapped tefillin on the arms of gravely ill religious men, in accordance to requests of family members.

Amal says she was struck, as she often is, by the caring atmosphere at work. Patients and staff were constantly asking one another how they and their loved ones were faring during this difficult time.

That feeling of mutual support is something she saw during her wedding last year, to a man she met when he was her patient in the Dialysis Department. The entire staff and many of the patients showed up to celebrate. “It was,” she said, “a Hadassah wedding.”

In the West Bank town of Bethlehem, Husam Jabar, a Palestinian tour guide who we met last season co-leading dual narrative tours with his Israeli friend Yuval Ben-Ami, has been trying to figure out what’s next now that there are no tourists in Israel. The economic and public health uncertainty is compounded, he said, by the Israeli government’s possible plans to annex parts of the West Bank this summer.

“The problem is the future. What's it going to bring to us?” asks Husam.

We tried to troubleshoot some ideas. Teaching? Hosting his own travel podcast where he revisits sights of historic, religious and political significance that he usually takes travelers to in person? Work for a nonprofit? He laughs out loud at that one. They have less money than ever because of corona, he said.

He misses being a tour guide. “Everything” about it. The long days, interacting with people, pivoting from ancient history and political commentary to troubleshooting logistics.

Instead he’s at home, focused on domestic life, his books, and all that is unknown. Plotting a next move feels paralyzing.

I also checked in with Hamutal Gouri, a Jewish Israeli, and Samah Salaime a Palestinian Israeli, who became friends through their work as feminist activists. During the lockdown there was a marked increase in domestic violence in Israel, as there was around the world.

Samah was coordinating with government authorities, trying not to get too addled by the bureaucracy and slow response while women’s organizations, both Arab and Jewish, bootstrapped their way through the crisis, finding ways to communicate by cell phone with even the most vulnerable of women. She credits living in Wahat as Salam/Neve Shalom, a village co-founded by Jews and Arabs, for giving her a feeling of community during the crisis.

Hamutal lives in Jerusalem with her partner and daughter. “Every single day during this crisis I reminded myself how blessed I was. I was safe. I was. Home was a really safe place for me.”

Seven women were murdered by their partners or relatives during the lockdown. After it eased, a rally was held calling for action along near the beach in Tel Aviv. Ten thousand people came and demonstrated while wearing masks and attempting to social distance. Hamutal was there. And so was Samah, who took to the stage and led a roaring crowd in a chant to end to the violence in both Hebrew and Arabic.

The rally was held on the edge of Jaffa. If was in Jaffa that I revisited The Arab-Hebrew Theater, the setting of the first ever Branch episode. It was there that the first production in the country post-lockdown was being staged. It was held in the theater’s stone courtyard next to the Mediterranean Sea to an audience of 50, who all had their temperatures checked upon arrival and were seated at a social distance. The show must go on, the theater’s director told them. Everyone clapped and cheered.

Go behind-the-scenes with host Dina Kraft: check out these photos from season 2 episode 1!