Israeli author Yossi Klein Halevi and Mohammad Darawshe, a founder of the Arab Israeli Ma'an party, are longtime friends. As intellectuals, they've both been shaped by their many conversations -- and occasional disagreements -- about the country they both call home. 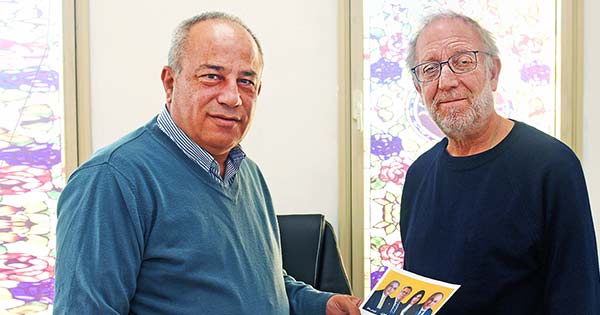 Mohammad Darawshe’s family has lived in the village of Iksal, built into the soft chalky rock of the hills outside of Nazareth, for the past 800 years. An oversized image of his face now gazes out from a campaign banner hanging from a building on its main street, which has become the headquarters for a new Arab-led party he created called Ma'an.

“Ma'an means together” says Darawshe, “It's Yahad and the full name is Ma'an Al Jedid: Together For A New Era.”

He decided after decades working in non-profits fighting for equality between Jews and Arabs in Israel that in order to make the biggest change, he should enter politics. So Darawshe created Ma'an to compete in the upcoming March 23rd Israeli elections as the first-ever centrist party led by Arab citizens. It seeks to partner with Jewish-led parties with the goal of entering a government coalition. As a fledgling party it was fighting an uphill battle to win enough seats to get into the Knesset and eight days before the election, when it became clear they did not have the needed votes, Darawshe decided to pull the party out of the race. He announced it would instead put its support behind the Joint List, an alliance of Arab-led parties.

Being part of the political center, Darawshe argues, will help Arab citizens have more of an impact in the political arena. It will doubtless be an uphill battle for a fledgling party like Ma'an to make it into the Knesset, but the idea of creating such a party has high support among Arab citizens according to a recent survey. It taps into a shift in the national conversation: Arab voters, increasingly economically integrated, are seeking a seat at the decision-making table. Meanwhile, predominantly Jewish parties are courting their support in this election from across the political spectrum — left, center, and in a new twist, also the right.

On the steps of the Ma'an headquarters, a religious, bearded, kippah-wearing Jew who immigrated to Israel from New York is giving a pitch to voters to support the party. It’s Yossi Klein Halevi, an American-born Israeli writer and author, most recently, of the bestselling book, Letters to My Palestinian Neighbor.

“I support Ma'an, it brings an important message not only for the Arab community, but also for the Jewish community. A message of building a Jewish-Arab future in this land together,” said Halevi, staring into a camera. It’s a marked statement considering Halevi’s younger years as a Jewish extremist, when he was a member of the militant Jewish Defense League, or JDL, led by the charismatic, far-right-wing and anti-Arab extremist Rabbi Meir Kahane.

Halevi, who has long since moved to the political center, had driven up from his home in Jerusalem to the Galilee to meet his old friend, Darawshe, for the first time since the COVID-19 pandemic hit and to learn more about this new political party.

The two have been discussing issues around Arab and Jewish identity in Israel for years and are currently both fellows at the Shalom Hartman Institute, which promotes religious pluralism and equal rights in Israel.

By way of explaining what drives him, Darawshe said, “I’m sick and tired of old school coexistence. It's that coexistence where we meet for a plate of hummus and we avoid the issues and we talk about how nice human beings we are. And we sing the hora and we do what we call 'cultural sharing.' This is nice for the moment. It expires the day after. It means nothing. It doesn't change reality.”

He’s hoping Ma’an, with its support of the Joint List, might help change that reality if the party can become the first Arab-led faction inside a ruling coalition.

Arab parties have never been in a ruling coalition to date because Jewish-led parties have doubted Arab allegiance to the Jewish state. On the other side, Arab parties feared being part of a coalition could lend unwitting support to what they see as harsh government policies toward their fellow Palestinians in the West Bank and Gaza.

“I think that the culture that needs to be created in the state of Israel needs to be an inclusive culture and creation, starting from the hummus and then all the way to the flag. Now, do I put this as a precondition to engage in a constructive relationship with Jewish fellow citizens?” Darawshe asked. “No, I put this as a challenge for you (the Jewish majority) to say if you are a responsible majority and not just a technical majority, then you need to create space for me.”

Go behind-the-scenes with host Dina Kraft: check out these photos from season 2 episode 9!