The Poet and the Prophet

When Neta Weiner, known as The Prophet for his dynamic on-stage presence, met Mohammad Aguani at an open poetry mic night, he was spellbound. Together, the activist-rappers founded System Ali, a hip-hop group that tackles social justice issues, now a central part of Jaffa’s diverse music scene. 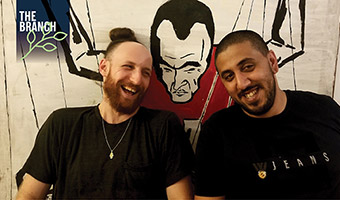 The Poet and the Prophet
By Dina Kraft

A System Ali show is all energy.  Members of the Jaffa hip-hop group leap and bound across the stage to thunderous applause, rapping in a rapid-fire mix of Hebrew, Arabic, Russian, Yiddish, Amharic. Occasionally they will throw in some English too.

Among the roughly ten musicians on stage are Neta Weiner and Mohammad Aguani. It's easy to spot Neta: he’s the one with an accordion. And Mohammed is up front too, rapping in Arabic and Hebrew to lyrics he has often written himself.

The two, now in their 30s, met 13 years ago at a café during an open-mic poetry night. Mohammad was reciting a poem he had written about the idea of homeland, and Neta took in every word, astonished, he says, by the power of what he was hearing.

A year later in the summer of 2007, together with a group of friends and fellow social activists, they formed System Ali – a combination arts collective and hip-hop ensemble. System Ali has become a force in Jaffa and south Tel Aviv’s cultural scene, using music as a tool to work for social justice and change.

The common struggle that brought them first together was the fight against house evictions in Jaffa as gentrification began to take root – its sea views and traditional Arab architecture. An ancient port city that abuts Tel Aviv’s southern edge, before Israel’s establishment in 1948 Jaffa was home to the Palestinian elite whose economy was based on a thriving citrus industry.

Many of System Ali’s songs address fears about the ways Jaffa, home to working-class Jews and Arabs for decades and now coveted by luxury developers, is changing. Tension over who will be able to afford to remain there and who will be forced to leave inform some of System Ali’s pieces, as do questions of historical justice and political and economic equality. Jaffa suffers from disproportionately high crime, some of it drug-related -- issues the group also takes on in their music.

As Mohammad tells me, “First of all I am a revolutionary. The microphone is my weapon.”

He’s been writing poetry for as long as he can remember. And only later did he find his voice for using it through rap.

Neta says this about Mohammed, one of his closest friends: “He's my teacher as much in terms of art as in terms of poetry. I think Mohammed is the person who actually gave me the understanding of what poetry is. He's the first poet that I've known.”

He describes Neta’s poetry as “sculpting with emotion, with words, using words in terms of your hands creating [a] force.”

Neta says Mohammad feels like family – someone you go through bad and good times with. And together they do not shy away from the issues of politics and identity that could divide them – instead they face them head on. The tensions and empathy borne from these conversations they have together, and with the wider group, also inform their music.

The two friends are so close that it was Neta who was among the first people to hold Mohammad’s children after they were born.

Mohammed also describes Neta like a family member, but then takes things a step further.

“He is also a friend, and also a brother. Well, I can't exactly say he's a brother, because brothers are not by choice. You come into this world and you are presented with a brother. But a friend is someone you choose. And a friend is everything.”

Neta was born on a kibbutz founded by his great-grandparents, and one of his grandmothers was a refugee from Nazi Austria. Mohammed’s father’s family has deep roots in Jaffa, an ancient port city overlooking the Mediterranean Sea, and his mother is from a West Bank refugee camp.

Their unlikely friendship - and the multicultural story of System Ali itself – is a reflection of Jaffa itself. It was once a major junction in the Middle East, a trading post for goods and ideas, where pre-1948, Jews and Arabs conducted business together in each other’s languages. All of this is still part of the fabric of Jaffa. As Neta says, “You just have to scratch the cement a little bit” to uncover it.

Neta and Mohammed’s friendship and System Ali’s activism is part of that story – that tradition of multiculturalism and mixing, clashing and melding. And together, as friends and as a group, they surge forward, trying to create something new. It’s similar to how they make music together.

As Mohammad explains: “We insist everyone brings themselves and what inspires them, but we often build on each other. But mostly we go with everyone -- with their perspective, their love, their pain, their hatred, and we connect in between, and at some point in this we all come together.”

Go behind-the-scenes with host Dina Kraft: check out these photos from episode 14!