The Ukraine war is now the largest refugee crisis since World War II. Hadassah Medical Organization is dispatching medical teams to meet the Ukrainians and provide assistance when they cross the border into Poland. In this episode, three Hadassah leaders discuss their medical involvement in this humanitarian mission. 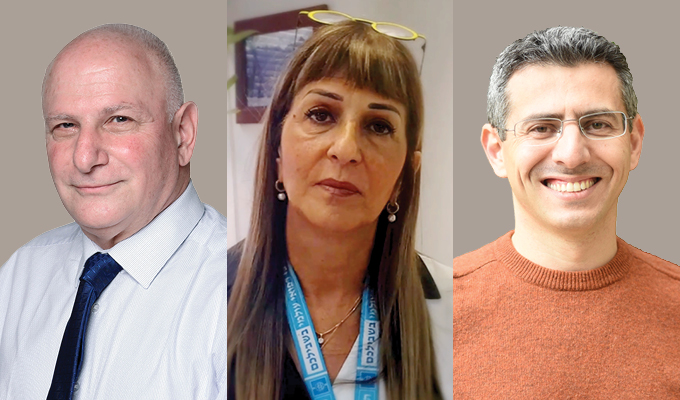 Prof. Yoram Weiss, MD is Acting Director General of the Hadassah Medical Organization. He was the director of Hadassah Hospital Ein Kerem from 2014-2021. Previously he was chairman of the Department of Anesthesiology (2009-2014) and director of the Center for Surgical Critical Care Medicine (2006-2009).He received his medical degree from the Technion Medical School in Haifa, subsequently training in anesthesiology and critical care medicine at Hadassah and the University of Pennsylvania. He has held two faculty appointments: Associate Professor at the Hebrew University-Hadassah School of Medicine and Adjunct Associate Professor at the University of Pennsylvania. Prof. Weiss was twice awarded a prestigious Israel Science Foundation (ISF) research grant and received the European Critical Care Research Network Basic Science Award from the European Society of Intensive Care Medicine.

Dr. Alex Gileles-Hillel is a senior pediatric pulmonologist and sleep physician at the Hadassah Medical Organization. Originally from Minsk in Belarus, he earned his medical degree from the Hadassah-Hebrew University School of Medicine in Jerusalem and pursued post-graduate training in pediatrics at Hadassah hospital in Jerusalem. Between 2013-2015 he completed a post-doctoral research fellowship at the University of Chicago's Sleep Research Center under the mentorship of Prof. David Gozal.

His clinical interests include pediatric pulmonary disorders, cystic fibrosis, obstructive sleep apnea, prematurity and obesity. His laboratory at the Wohl Institute for Translational Medicine at Hadassah Hospital Ein Kerem focuses on the role of obstructive sleep apnea on the development of atherosclerosis and metabolic dysfunction.

Rely Alon, PhD is the director of the Hadassah Medical Organization's Division of Nursing and Health Professions. Born in Israel to Holocaust survivor parents, she is also qualified as a midwife and as one of Israel's few nurse practitioners. Dr. Alon is a graduate of the Henrietta Szold Hadassah-Hebrew University School of Nursing. She came to Hadassah from Assaf HaRofeh Hospital in Be'er Ya'akov where she directed the Henrietta Szold Hadassah-Hebrew University Nursing Extension and headed the Women's Health Center of the Maccabi Health Services. After receiving her BA in Nursing from Tel Aviv University in 1997, Dr. Alon earned a PhD in Gender Studies from Bar-Ilan University in 2015.

The world is watching as war rages in Ukraine. More than 4 million people have fled the country in what has become the largest refugee crisis since World War II. Hadassah Hospital has sprung into action, dispatching teams of doctors, nurses and even medical clowns to greet the fleeing Ukrainians as they cross the border into Poland. In this special episode of the "Hadassah on Call" podcast, we spoke with three people who are intimately involved in this humanitarian mission.

Professor Yoram Weiss is the acting director general of the Hadassah Medical Organization and has been orchestrating the hospital's response from his office in Jerusalem. "Hadassah has been active for many, many years in disaster areas," he said, citing examples in Haiti, Africa and Asia. "Immediately when the hostility started, we felt that we needed to be part of the response."

Weiss got in touch with the major hospital in Lublin, and sent a team from Israel to train them in how to deal with mass casualties. "Hadassah has huge experience in treating traumas," Weiss said.

Since the crisis began, Hadassah has also been sending a new team every 10 days to the Poland-Ukraine border. One of those physicians on the front lines was Dr. Alex Gileles-Hillel, a senior pediatric pulmonologist and a sleep physician at Hadassah Hospital. The trip was personal for him: He is from Minsk, formerly a part of the Soviet Union. Moreover, the fact that he spoke the language meant he could better communicate with the fleeing refugees to better help determine their needs.

Along with the Polish Red Cross and the World Health Organization, Hadassah helped turn a shopping mall into a massive medical center. A steady stream of patients, mostly women and children, came to see Dr. Gileles-Hillel who performed life-saving medical treatments. "This really made me think about the fragility of where we are," he told us. Now back in Israel, Dr. Gileles-Hillel is volunteering his time to help take care of newly arrived Ukrainian children.

Another integral member of team is Rely Alon, PhD, the director of the nurses' division and health professions at Hadassah Hospital. She oversees around 2,000 nurses, some of whom are traveling to the region to help refugees as they cross into Poland. "It doesn't matter if they're Jews or not Jews, we're there to help people with whatever they need," she said. "Even if they need a soup or they need tea, or they need someone to talk to, or they need a bandage." Nurses, she said, are the heart of the hospital. "I always say, people forget what you told them, but you never forget how you make them to feel."

In addition to the nurses on the border, Dr. Alon has set up a toll-free hotline for pregnant Ukrainians. The phones are answered 24/7 by Russian and Ukrainian-speaking Hadassah nurses and midwives who are there to answer any questions.

Professor Weiss is quick to point out that it takes a village to make all of this happen. "I want to really thank our donors all over the world who are supporting our activity," he said. "Our donors are really the foundation of this organization, and we thank each one of them full-heartedly for their support."

Further learning: Read more about Hadassah’s response to the humanitarian crisis in Ukraine.

The show is hosted by Benyamin Cohen and produced by the team at the Hadassah offices in both New York and Israel.

Watch the interview below.

Our recent episode about Ovarian Cancer:

If you enjoyed this conversation, you may want to check out our last episode, where we spoke with both a doctor and a patient about ovarian cancer. “Being treated in Hadassah, you feel you are at the cutting edge of medicine,” said Dr. Rivkah Brooks. “It's the cutting edge, the best clinicians, the best research, amazing people.” You can find that episode of “Hadassah On Call” on Apple Podcast, Google Play, or wherever you get your podcast. Or on the web at hadassah.org/hadassahoncall.

As you're heard on this episode, Hadassah has been on the ground helping on the border of Poland and Ukraine since the war began. You can help these efforts continue be by making a donation to our Ukraine mission. Simply go to hadassah.org/ukraineresponse and click on the donate button. While you're there, you can also make a contribution to our Youth Aliyah program, which helps shelter refugees from the Ukraine war. Thank you so much for your support.