2018: A Year of Advocacy Successes 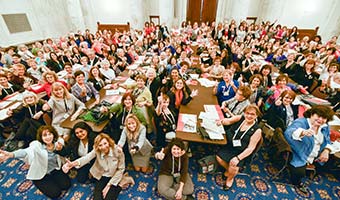 Several end-of-year legislative victories capped off a banner year for Hadassah advocacy! Hadassah advocates can feel proud of everything we've accomplished together in 2018.  Check out the year’s advocacy highlights and help amplify our impact for 2019.

Help us amplify our impact for 2019! Welcome the 116th Congress via the Hadassah National Action Center and register to become a Hadassah Advocate.

As part of Celebration 2018, the Hadassah Women's Health & Advocacy Conference in May gave Hadassah advocates the tools to engage their communities and empower women back home, particularly around Hadassah's health and advocacy efforts in the United States and in Israel. During Day on the Hill, 250 Hadassah advocates from 25 states and every Hadassah Region participated in over 80 meetings with congressional offices. Conference attendees also joined the Women’s Health Empowerment Summit, hosted by Hadassah’s Coalition for Women’s Health Equity.

Hadassah members held 34 Day in the District meetings with federal legislators when they were home from Washington. Meetings occurred from coast-to-coast in 14 different states — the most Days in the District of any year since the program was launched.

Hadassah proudly opened a Government Relations Office in Washington, DC and hosted an opening reception on December 6. The office will give Hadassah a physical base from which to educate, activate and mobilize our membership, serving as a hub to harness grassroots engagement and maximize advocacy impact. At the same time, it will position us to deepen our critical relationships on Capitol Hill and with the White House, and lead Hadassah’s legislative and grassroots mobilization strategies, including working side-by-side with congressional offices in support of key policies.

Hadassah members and supporters raised awareness on social media and sent thousands of messages to Congress in support of our policy priorities. By promoting the opinion pieces by Hadassah’s leaders, you spread the word about our love for Israel, the need for Holocaust education, and misdiagnoses that put women’s health at risk.