A Pink Wave Across the United States 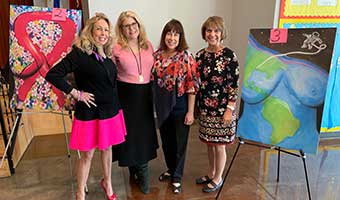 She wasn't the only one in the room.

Of the nearly 150 men and women gathered at a local Jewish day school for the Hadassah Think Pink event, few were left sitting. "There is hardly anyone who hasn't been affected in some way by this disease," she said, talking about recent advances made at the Hadassah Medical Organization (HMO). "Researchers at HMO pioneered a diagnostic regimen to prevent transmission of the BRCA mutation to the next generation," she said. "This breakthrough enables women who carry the mutation to have their embryos pre-screened."

Marie Sena brought home the realities and possibilities women now face after mastectomies, talking about her work with plastic surgeons, breast surgeons, oncologists, nurses and patient advocates as a medical illustrator/tattoo artist who helps reconstruct and tattoo on areolas.

Judith Macon, RN, MA,  Manager of Cancer Outreach at Suburban Hospital Cancer Program in Bethesda, educated the audience about breast cancer, with which 1 in 8 women will be diagnosed in her lifetime.

"I really didn't want to come," said one attendee. "My wife talked me into it and I am really glad I did. The speakers were outstanding!"

The event raised nearly $55,000, and donations are still coming in, all to support Hadassah's efforts.

From Atlanta to Greater Washington and Denver to Florida, Hadassah chapters around the country drew crowds and donations during Breast Cancer Awareness Month, sharing our pride in the lifesaving advances being made at the Hadassah Medical Organization.

Blues for Boobs in Calabasas
Live music, cocktails and a silent auction, and alcoholic beverages were enjoyed by 120 attendees at Blues for Boobs, featuring Dr. Janie Grumley, a surgical breast oncologist. Together, they raised $20,000.

Pizza in the Hut in Paramus, NJ
At this breast cancer event during Sukkot, Jill Tekel, Area VP for Hadassah Northern New Jersey, presented Clinical Nurse Educator JoAnne Strassberg of Valley Hospital with a certificate of apprecation. JoAnne shared her own story as a breast cancer survivor and spoke about breast cancer advances and treatments during this Sukkot event.

In Denver: What's in Your Jewish Genes?
A physician, a genetic counselor, and a BRCA-positive cancer survivor and  a pre-vivor who has had extensive surgery spoke at this Denver Hadassah event, held at a local synagogue in partnership with the Colorado Ovarian Cancer Alliance. Roni Ogin spoke about HMO's research on BRCA and gave a certificate to the family of Risa Buckstein, past president who died of ovarian cancer three weeks prior, after organizing much of the event. The event was dedicated to her, and the chapter donated $1,200 for a mezuzah at HMO in her memory. Other donations went toward the Round Building campaign.

"The Pink Hulk" in Richmond, VA
In her one-woman show, "The Pink Hulk: One Woman's Journey to Find the Superhero Within," Richmond native Valerie David highlighted her fight with breast cancer, joining a VIP reception after the show.

Plymouth MA Fashion Show
This fashion show with a breast cancer theme brought nearly 100 people together, raising $6,000 funds for HMO and educating the community about breast cancer and Hadassah programs.

Bloomingdale's and Hadassah Partner Again on Shop For A Cause

Together, we have the power to heal the world.