A Special Delivery: From Ohio With Love 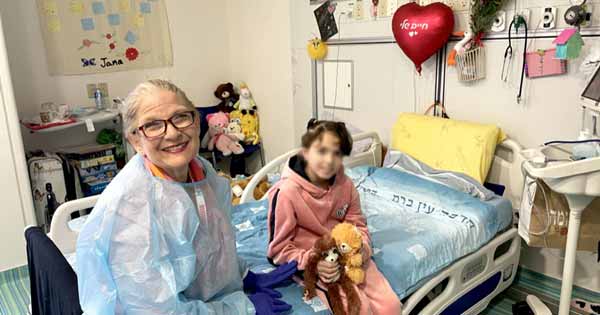 Jana, 10, has a growing stuffed-animal collection, speaks Arabic and has only one kidney. When she got a dangerous infection in her sole kidney,  Dr. Oded Volovelsky, the award-winning head of Hadassah Hospital Ein Kerem’s pediatric nephrology unit, was able to stabilize her condition. She is now recovering in a special sterile room at Hadassah’s Charlotte R. Bloomberg Mother and Child Center.

On Tuesday, November 16, Jana’s face lit up when she received a special visitor, who came bearing gifts, two new additions to her prized collection: a stuffed sloth and an orangutan. With her mother and Dr. Oded helping to translate, Jana shared a special moment with Hadassah National Secretary Carol Ann Schwartz. Schwartz had stopped by Jana’s room with Dr. Oded while making a special delivery to the children’s ward, bringing hand-knit blankets, toys and clothes, sent by the members of Hadassah’s Cincinnati chapter.

Schwartz has a long, special connection to Hadassah Hospital Ein Kerem, the children’s ward, and to Dr. Oded Volovelsky, forged during his four-year fellowship at Cincinnati Children’s Medical Center. In Israel and beyond, Dr. Oded Volovelsky is known for the multidisciplinary children’s dialysis clinic he runs and his groundbreaking research, featured recently on the Hadasah On Call podcast.

Usually in Israel at least once a year, Schwartz brings gifts for the children, often to patients of Dr. Volovelsky, like Jana and Yehoshua, 22 months old, another patient in the pediatric ward she met. He picked a stuffed caterpillar.

For Schwartz, a deeply committed Hadassah leader and major donor, family is key — and she’s involved her own children in supporting pediatric care at Hadassah Ein Kerem.

Read about the family values that guide Carol Ann Schwartz’s philanthropy and commitment to Hadassah.