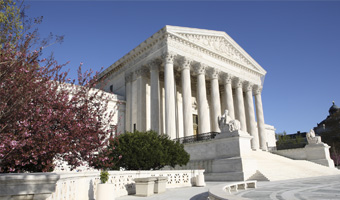 On October 5, the Supreme Court returned to session for the start of a new term. Through Hadassah's National Center for Attorneys Councils, Hadassah members and associates with a legal background play a vital role in supporting Hadassah's advocacy efforts through the Hadassah Amicus Brief program.

Hadassah joins with coalition partners to file amicus curiae ("friend of the court") briefs on issues of importance to Hadassah—influencing cases and strengthening Hadassah's policy positions. This past year, Hadassah signed briefs for numerous significant cases. Read below for the amicus brief highlights from the past year.

The brief addressed the potential impact of the decision on women. It featured examples of women benefitting from the health care law, focusing on minority women, elderly women, and women on Medicaid. The brief highlighted that a major goal of the Act was to increase women's access to health care, and address the disadvantages and discrimination women confront in obtaining affordable health insurance.

The U.S. Supreme Court upheld the constitutionality of the Act provision, ruling 6-3 that individuals who purchase health insurance on federal government-created exchanges can utilize the Act's tax credits.

In the landmark decision the U.S. Supreme Court ruled 5-4 that under the Fourteenth Amendment a state must license a marriage between two people of the same sex, and recognize such a marriage if it was lawfully performed and licensed in in another state.

Hadassah joined a coalition amicus brief in Zivotofsky v. Kerry, a case regarding the right of American citizens born in Jerusalem to have Israel listed on their American passports and birth certificates as their place of birth. While a 2003 statute instructs the Secretary of State to record Israel as the place of birth, the State Department has denied this request based on the longstanding U.S. government policy concerning the unresolved status of Jerusalem.

In a 6-3 ruling the U.S. Supreme Court decided that since the power to recognize foreign states belongs exclusively to the President, and the Executive branch holds a position not recognizing any nation's sovereignty over Jerusalem, the 2003 statute violates the President's recognition power.

Separation of Church and State

Hadassah signed on to a coalition amicus brief in Steven Trunk, Jewish War Veterans v. the United States. The case involves the constitutionality of a 43-foot-high cross (owned and displayed by the federal government) that is the centerpiece in a memorial dedicated to honor Korean War Veterans on Mt. Soledad in La Jolla, California.

The U.S. Supreme Court sent this case back to the U.S. Circuit Court of Appeals for the Ninth Circuit for rehearing. Hadassah had joined an amicus brief in this case in 2011 when it was previously before the Ninth Circuit and the court ruled that the display violated the Frist Amendment's Establishment Clause since it conveyed an unconstitutional message of government-endorsed religion.