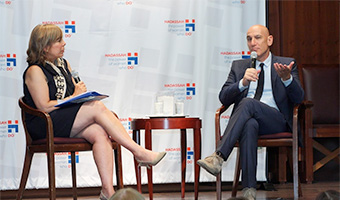 "Our goal for Defining Zionism," Hadassah National President Ellen Hershkin said in her opening remarks, "was and remains to this day to create a safe space for a dialogue on Zionism — a topic close to all of our hearts. Once a dream, now a reality, even a philosophy — yet too often, Zionism continues to be distorted and smeared. It is our intention to define and reclaim Zionism… It is our hope that on this most passionate of subjects, we will together create mutual and civil discourse, as it is more important now than ever."

Mr. Benn covered a lot of ground, including his belief that if Jews outside of Israel support Israel and are committed to its survival, then of course criticism is part of their love for Israel. Some of this criticism is attributed to human rights. As a Liberal Zionist, Mr. Benn thinks Israel must ensure equal rights for all its citizens, but the country should still maintain its Jewish characteristics, language and culture. For that reason say he doesn't want more privileges than his neighbors in Jaffa.