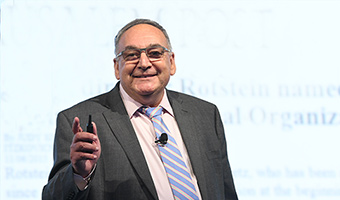 Hadassah Medical Organization Director General Zeev Rotstein will head the prestigious 2020 National Committee that determines what medications will be included in the “basket” Israeli physicians can prescribe without extra cost for patients. The appointment, made by Deputy Minister of Health Yakov Litzman, was announced at the annual Israel Medical Convention in August.

Israel has a comprehensive national health system that includes the cost of medications. Determining which new medications should be added is a challenging process, followed closely in the media and by the Israeli public.

Said Litzman, “We will bring a new basket to Israel with a budget of 700 million shekels. In the near future we will publicize the members of the committee.”

“I receive this announcement with surprise, emotion, and excitement,” Prof. Rotstein said. “It’s one of the most important roles in the Israeli health system, and I accept the responsibility to work tirelessly for the good of the public.”

In recognition of Prof. Rotstein’s prestigious new appointment and his work on behalf of the Hadassah Medical Center, as its Director General, The Jerusalem Post has named Prof. Rotstein one of its  “50 Most Influential Jews of 2019.”