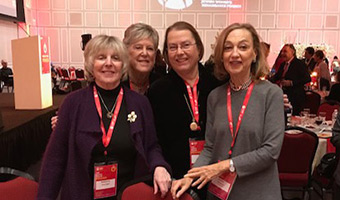 “As the CEO of Hadassah for the past six years and as someone who has fought for over 40 years for the continuity and sustainability of Jewish life, I can think of no greater honor than to receive the Pamela Claman Award,” said Hadassah Executive Director/CEO Janice Weinman as she accepted the 2018 Pamela Claman Award from the Jewish Women’s Renaissance Project (JWRP). “Hadassah has long provided a structure and arena to organize, mobilize and support both the health care of Israel and a 300,000 member network of activists in the US.  JWRP has created and established an unparalleled community of women connected to Jewish values and to the state of Israel.”

“I am deeply humbled and equally grateful not only for this recognition but for the wonderfully productive and successful relationship that JWRP and Hadassah have formed.  Together we represent not only the power of women taking action but also the impact our power has when women unite,” she told the 325-plus attendees during her remarks at the Dec. 12 awards ceremony in College Park, MD, part of JWRP’s North American Momentum Conference.

The Pamela Claman Award is presented to an “international role model who has significantly impacted the Jewish world with inspired leadership.”

Speaking of the partnership between Hadassah and JWRP, Janice Weinman said: “Over the past few years our organizations have come together in a match made in heaven, as Lori Palatnik said to me, to leverage, maximize and thereby better fulfill our common goals - to create in women the passion for and commitment to the land, the people and the future of Israel.  We have done so not only through participation in the Momentum missions ¬- where Hadassah has had the privilege to show mission members our two state-of-the-art, lifesaving hospitals in Jerusalem, and our youth development villages, and JWRP has had the opportunity to infuse and encourage a sense of spirituality and peoplehood among participants —  but, more importantly by establishing afterwards communities of sisterhoods who study together, create Jewish households together and reach out to others to become part of our network.”

On a personal note, Janice spoke of being “the child of Holocaust survivors who visited Israel for the first time at age 4… My heart and my soul have always been caught up in the conviction and responsibility to make sure that it ‘Will Never Happen Again.’”

Urging action, she said: “Imagine how much we, as a collective group of dedicated women from two like-minded organizations, can do: to speak out on behalf of Israel and the contributions it makes to humanity; to create communities of learning and understanding of our past, our heritage and our identity; to mobilize together against encroachments on our beliefs and liberties, and, most of all, to prepare the next generation to be committed to Zionism and Judaism. Both last week's parsha, Miketz, and this Shabbat's Torah portion, Vayigash, describe the story of Joseph. When we read about the exigencies, the challenges, the difficulties that he faced in his life, we are overcome by the overriding theme of persistence.  Persistence has been the hallmark of the Jewish people and the driver of our continuity.  Given the relationship we have established between our two organizations, there is no doubt that we will be able to prevail in our persistence, in our commitment to the Jewish people and in our collective success.”

Janice Weinman came to Hadassah in 2012 directly from her post as President of K.I.D.S., an organization supporting millions of children in need in communities across the United States and overseas.  Earlier leadership roles include VP for External Affairs of The Mount Sinai Hospital / NYU Medical Center and as Executive Director of the American Association of University Women (AAUW). She served in both the Carter and Clinton administrations.  Other roles include inaugural board member of the Hadassah Foundation, Board Chair of the JCRC of New York, Board Chair of the Women’s Leadership Board of the Kennedy School of Government at Harvard University.