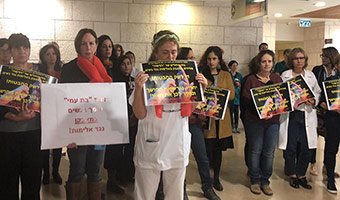 On December 4, employees from both Hadassah Hospital Ein Kerem and Hadassah Hospital Mount Scopus rallied to end violence against women. “Together we will banish the darkness and return the light to all women,” read banners held by the participants.

Raising awareness of the pivotal role Hadassah plays in counteracting this all-too-prevalent problem, the staff of its Bat Ami Center for Victims of Sexual Abuse, led by Dr. Dvora Bauman, spoke about the ways that the center supports victims. Medical students handed out informational flyers to spread the message.

Prof. David Mankuta, Director of the Labor and Delivery Department at Hadassah Ein Kerem and a volunteer at the Bat Ami Center, emphasized that everyone is responsible for detecting abuse of women and for eradicating the phenomenon. “At work, in school, or at home,” Prof. Mankuta cautions, “this violence knows no boundaries, and it affects women from all backgrounds.”

In Israel, 24 women have been murdered since the beginning of the year—including young girls. Nitzah Shemesh, Chair of the Nurses’ Association at Hadassah, called for action to protect women against becoming the next victims.

Nurit Feidel Levy, head social worker at the Bat Ami Center, emphasized that “we need to identify the signs, not just in those women who come to us to complain, but also in our patients in the emergency room and all the hospital wards who wouldn’t dare report the abuse they have undergone.”