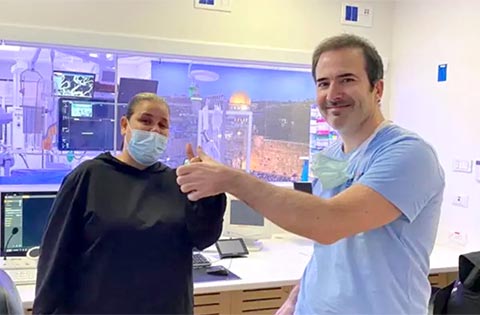 On Nov. 18, 2020, Riki Bitton, a 42-year-old youth worker and private investigator, woke up and realized immediately that something was terribly wrong with her. “I tried to move my right arm, but I couldn't,” she says. “I just stared at it. Then I tried to move my right leg. The same. Then I tried to speak. I knew what I wanted to say—my mind was clear—but I couldn't get the words out. I realized that I seemed to be having a stroke, but how could I be, at age 42? Strokes are for grandmas and grandpas. On the other hand, what I was experiencing was exactly what I had seen on a TV infomercial about strokes.”

Riki, her husband, Momi, and their two children live on Moshav Tzalfon, halfway between Jerusalem and Tel Aviv. Momi had grown up there on his parent's flower farm, and he and Riki had built a house on the property.

“I heard our son come into the house,” Riki says. “I called out to him from my upstairs bedroom. He must have heard my strangulated voice because he ran up the stairs. My speech was too garbled to explain what I was experiencing. He phoned my husband, and the ambulance was on its way.”

The ambulance driver suggested that she be taken to a hospital in Rehovot, which was, according to WAZE, a little closer, but when Momi heard that his wife might be having a stroke, he insisted on Hadassah Hospital Ein Kerem.

“The ambulance raced to Hadassah Ein Kerem, and I was rushed into the angiography suite where Prof. Jose Cohen, head of Hadassah’s Endovascular Neurosurgery Unit, was already scrubbed and ready.”

Riki was in surgery within moments of arriving at Hadassah. Amazingly, only two hours after the procedure, she was in a hospital room in Hadassah’s Sarah Wetsman Davidson Hospital Tower, having a conversation with Prof. Cohen. He explained that the major artery bringing blood to her brain had been blocked by a massive clot. He described how he used a microguidewire to navigate a microcatheter to the site of the obstruction and a stent retriever to snare the blood clot, restoring blood flow in her artery. ”Getting to the hospital fast was crucial,” he told her.

Prof. Cohen noted that though strokes are more common in older individuals, they can occur at any age. “Do you know how often we tell people to stop smoking, check their blood pressure, begin exercising, get a good night's sleep and give up junk food?” Prof. Cohen asked Riki.

In response, Riki now promises to be an advocate for a healthy lifestyle and for recognizing the symptoms of stroke. “I'm a believing person,” Riki says. “I see Prof. Cohen as an ambassador from God. When we light our hanukkiya and remember the miracles of the past, I think of my own Hanukkah miracle. My family and I want to thank the amazing staff at Hadassah Ein Kerem and the donors around the world who support the hospital. If we hadn't gone there, I wouldn't have made it.”