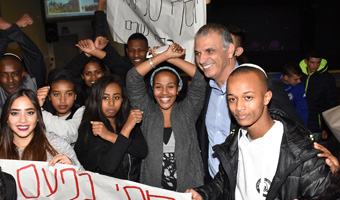 Finance Minister Moshe Kahlon, who graduated from Hadassah-Neurim in 1978, came to the Netanya campus yesterday to kick off an organization of local supporters of the Youth Aliyah village. Said Kahlon, "I was a terrible student, getting up every morning at 3 am to fish, so that I could help my parents and my six siblings put bread on the table.  By the time I got to my first class, I wanted to go back to sleep. But, Hadassah-Neurim never gave up on me. One teacher had overreaching faith in me, and said I would go places. I wasn't the only one. The village turned a group of delinquents into citizens and successes in life."

Kahlon, a rising star in Israeli politics, whom some have predicted will one day be Prime Minister, was born in 1960 in the poor Givat Olga neighborhood of Hadera. He was the fifth of seven children. His parents made Aliya from Tripoli, Libya. His mother was illiterate. His father worked in construction, but was incapacitated at work, so there was little family income. He and his brother were sent to Hadassah-Neurim by social services.

"We were lucky," said Kahlon, "We were in an environment where they tell you 'just get up' when you fail. They eradicated our fear of failure, which is a necessary ingredient in success."

In the IDF he served for nine years in the Ordnance Corps. He had learned metal working at Hadassah-Neurim and later started a business of importing car appliances and went on to earn a BA in political science, and a law degree. He studied advanced management at Harvard University. Kahlon was elected to the Knesset in 2003, and subsequently went up the ranks of the Likud party. He started his own party, Kulanu, two years ago, and today he is part of the coalition as the Minister of Finance.

"I went from Hadassah-Neurim to Harvard and the Knesset. At Hadassah-Neurim, I sat right over there in the auditorium," he said, pointing to a middle seat. "Any one of you boys or girls can do the same thing. The village empowers boys and girls equally."

The teens, many from large immigrant and troubled families themselves, gathered around the Minister of Finance, who was once one of them, as if he was a rock star.

Kahlon received a certificate as a "Friend of Hadassah –Neurim," and the Minister of Finance pledged to do everything within his power to advance the village and the technological education in the country.

Said Kahlon, "The motto of my life is taken from Rabbi Abraham Isaac Kook, the first chief Rabbi of Israel. He said that every child needs an adult who believes in him/her. In this case, Hadassah-Neurim and those who support it get credit.”

Hadassah-Neurim has been a refuge for children from all over the world-and from Israel, too, says village director Natan Biton. “Remember that Hadassah-Neurim was established in 1948 to absorb children running away from the gunfire of the War of Independence from Ben Shemen, near Lod. We are pleased that we can offer shelter, education and hope to these children, thanks to the generosity of the women of Hadassah.

Hadassah is a partner in the village jointed with the Jewish Agency for Israel. The new Friends organization is calling on well-to-do Israelis and businesses to supplement special projects for the village teens.

Read about how our Youth Aliyah program sets at-risk children in Israel on the path to a successful future. Since 1934, over 300,000 young people from 80 lands have graduated from Youth Aliyah. For more information: hadassah.org/how-we-help/youth-at-risk