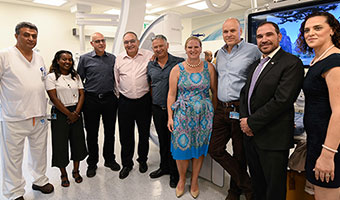 Hadassah Hospital Mount Scopus inaugurated the first advanced cardiac catheterization unit serving Jerusalem’s northern neighborhoods on May 29th.  The Cath Lab was donated by the United States Agency for International Development (USAID), through Hadassah, the Women’s Zionist Organization of America (HWZOA) and will provide life-saving services to thousands each year.

Dr. Tamar Elram, Director of Hadassah Mount Scopus, welcomed the crowd gathered for the opening. “It is not every day we make history,” said Dr. Elram. “It is not every day we see how our efforts will save hundreds, or thousands, of people each year. For decades, USAID has generously supported Hadassah. This is not a coincidence. USAID and Hadassah share many of the same values, such as excellence in medical care, equal treatment for all, professionalism, and compassion.

“The heart of Hadassah has been beating here at Mount Scopus for almost 90 years. Here we prove every day that no vessel, no path is too blocked to walk through—and if it is, there is always a collateral pathway to achieve the best level of care that we owe our patients. It is thanks to the integrity, wisdom, compassion, and technique of our staff – past and present – and thanks to the generosity you and many others show us,” she said.

Dr. Rachel Schonberger spoke on behalf of Hadassah, the Women's Zionist Organization of America. “We would like to thank USAID and their work as agents of the United States government,” she said. “I like to call the cath lab a cath suite because it is so sophisticated. We know it will make a difference in so many lives. The Linda Joy Pollin Cardiovascular Wellness Center for Women’s outreach programs to women in the neighborhood focus on health and how to identify a heart attack. This Cath Lab Suite is the next link in the chain of healthcare for these populations.”

Prof. Zeev Rotstein, Director General of the Hadassah Medical Organization said, “Today marks the end of the three-year process in building the cath lab. Now, Hadassah offers equal services for cardiac patients at both our campuses,” he said. “I am proud of the team at Mount Scopus. There is a unique feeling here that everyone feels like family – and the patients notice. It’s an immediate feeling of knowing you are in the right place, despite the hospital’s need to upgrade the physical infrastructure that has been in place since 1971. Hadassah Mount Scopus is becoming a leading Israeli hospital with cutting-edge technology, and we are working on improving the hospital even more. I am honored to be part of the Mount Scopus team.”

Rabbi Aryeh Lightstone, Advisor to the US Ambassador to Israel, said, “The relationship between USAID and Hadassah is five decades old. My grandmother in Pueblo, Colorado founded a chapter of Hadassah in 1931. She is my role model because of her dedication to her country, the United States, and her Jewish heritage. She always said, ‘If no one else is leading, you must lead.’ I am sure that in 1931 she couldn’t imagine today when her grandson would represent the greatest country and stand on holy ground to open a cutting-edge medical cath lab. It is miraculous.

“On behalf of David Friedman, the US Ambassador to Israel, and President Trump, I am honored to be here today and commit to continuing to support Hadassah for the next 80, 90 years. When we join together, we can build something greater than any individual one of us could alone. My grandmother in the '30s embodied this when she collected nickels and pennies for Hadassah. She joined other Hadassah women throughout America. USAID collects nickels and quarters to spread the greatness of the greatest country," said Rabbi Lightstone.

“Hadassah hospital does not discriminate," he said. "Every person who walks through these doors is treated with respect and dignity. Every person treated here walks out not only more healthy, but also a better person. I am honored to be here with my colleagues from USAID to partner with Hadassah: in the past, now, and in the future.”

The ceremony ended with Leah Migdal, physiotherapist at Hadassah Mount Scopus, performing Hallelujah in three languages— English, Hebrew, and Arabic— to enthusiastic applause. Guests then were invited to tour the cath lab.

Before unveiling the USAID plaque and cutting the ribbon to the cath lab, Karla Fossand, Office Director, Invention in the Next Generation USAID, said, “Ours is the easy part. It’s you who put the needs of others in front of your own and your families. It’s you we want to thank.”

Rabbi Aryeh Lightstone affixed the mezuzah with the traditional blessing.

Despite its officially opening only today, Dr. Aharon Alcalai, head of Cardiology at Hadassah Mount Scopus, told of a patient passing by Mount Scopus in an ambulance when the paramedics realized he needed urgent care. Dr. Alcalai turned on the lights of the cath lab to save this patient’s life.

Esther Tafara serves as chief technological engineer of the new cath lab. She arrived from Ethiopia at age nine on her own, since her parents and siblings were not allowed to leave. From the airport, a cab took her in search of distant family in Jerusalem – who did not expect her arrival. From those shaky beginnings, Tafara went on to pursue medical engineering and worked in Hadassah Hospital Ein Kerem’s pulmonary department for years – until she was offered the opportunity to run the new cath lab in Mount Scopus.

The futuristic Cath Lab is powered by the Philips Azorion 7, the most advanced medical equipment of its kind in the world. The Azorion 7 works quickly to provide precise imaging with lower levels of radiation.