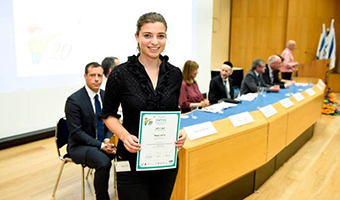 Leyla Vinopal of the Hadassah-supported Meir Shfeyah Youth Village was one of the top winners in the Intel-Israel Young Scientist Competition, recognized for her work on “The Impact of the Immune System on the Development of Alzheimer’s in an Animal Model.”

Leyla--one of four future scientists from among hundreds of student applicants from around the country--was chosen to represent Israel this September at the European Union Contest for Young Scientists in Tallinn, Estonia. Her mentors were Dr. Nurit Hochberg from Meir Shfeyah and Prof. Michael Schwartz from the Weizmann Institute of Science.

Yoram Panias, director of the Youth Village, noted: "All of our winners are outstanding students, and just the tip of the iceberg at Meir Shfeyah , where the aim is excellence in education.” At the same time, he says, “the agenda of the school is not only to encourage students toward greater academic achievement, but to take part at the same time in social activities, volunteering, and sports." Leyla is also a talented violinist.

Awards were presented during a March 21 event to the winners at the Knesset on March 21. About 70 scientists, boys and girls ages 16 to 20 from all over Israel, participated in the final round.

Since Israel began participating in the EU Contest, 26 Israeli students have won prizes.
Back to Hadassah Stories