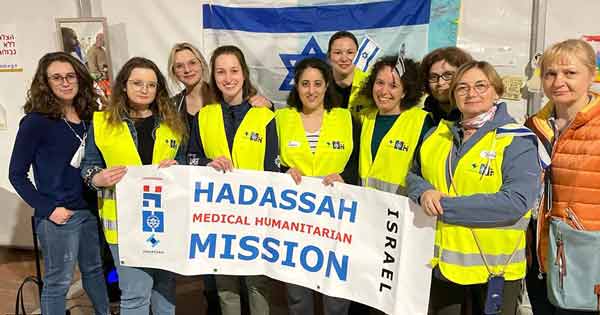 On January 11, the Genesis Prize — aka the “Jewish Nobel” — announced its 2023 Genesis Prize, awarded to Jewish activists and NGOs for their work supporting the Ukrainian people in the wake of the humanitarian crisis, including Hadassah, the Hadassah Medical Organization and Hadassah International.

The Genesis Prize Selection Committee departed from the usual custom of awarding the prize to a single Jewish individual and instead announced a collective award -- given the extraordinary circumstances of the war in Ukraine and the humanitarian response of the global Jewish community.

“The past eleven months have been unlike any previous period in the 10-year  history of the Genesis Prize, with war, destruction, and human suffering on a scale unseen since World War II. But there has also been human kindness, compassion, and activism on an unprecedented scale,” said Stan Polovets, Chairman/Founder of the Genesis Prize Foundation, and  Trustee Natan Sharansky in a January 11 statement. “Across the world, thousands of individuals and organizations were moved to action – making a moral choice to volunteer, donate money, shelter refugees, and engage in political advocacy.”

When the bombs first dropped on Ukraine, Hadassah, the Hadassah Medical Organization (HMO) and Hadassah International joined forces to get the first hospital shipment of humanitarian supplies to refugees. Over the next few months, Hadassah sent 15 medical delegations to help Ukrainians, bringing HMO expertise on mass casualties and trauma response where it was desperately needed. We set up and ran medical clinics on the Ukraine/Poland border, collaborated with the World Health Organization, Doctors Without Borders/Médecins Sans Frontières and others to treat over 31,000 Ukrainian refugees. In Israel, over 50 young refugees were given a new home at our Youth Aliyah villages.

“As an organization committed to healing, we are so grateful to everyone who made this work possible, including the generous donors who together raised nearly  $1.7 million to make Hadassah’s humanitarian efforts possible and the volunteers, medical professionals and staff who helped bring these efforts to life," said Hadassah National President Rhoda Smolow and CEO Naomi Adler. "Our Jewish values tell us that when there is a crisis and we can make an impact we need to act — and act we did. We thank the Genesis Prize for taking this opportunity to recognize the humanitarian efforts of the Jewish community."

Watch this short video from the about Hadassah’s efforts during the Ukraine crisis.

Read about our 2022 Ukraine in Crisis: Saving Lives at Risk campaign.

Support Hadassah and our efforts to heal the world in the US, Israel and beyond. Donate today.