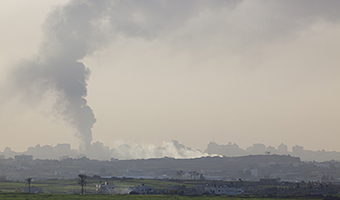 From Monday to Tuesday evening, Hamas launched over 460 rockets into Israel—the most in such a short amount of time since the terrorist group took control of Gaza. This barrage of rockets was not aimed at military targets; it was aimed indiscriminately at civilians. These attacks killed a man and injured two women when their apartment building in Ashkelon took a direct hit. There are reports of severe infrastructure damage in Sderot and Ashkelon, and over 90 Israelis have been treated for injuries. Schools were closed, and entire families shuttered themselves in stairwells and safe rooms. At least 40% of Sderot’s children suffer from post-traumatic stress disorder due to the warlike atmosphere in which they grow up.

We join with the State Department in proclaiming loudly and clearly- Israel has the right to defend herself from these egregious attacks on her people. We remain cautiously optimistic that the ceasefire brokered late Tuesday night will hold. We also applaud the State Department’s decision to target specific Hezbollah and Hamas terrorists. Removing these threats from the Middle East will make Israel and the world more secure.

“No country in the world would accept such blatant violation of its sovereignty, nor tolerate attacks against its citizens. Hadassah stands strongly with the people of Israel during this difficult time and reasserts our unwavering support for a strong US-Israel relationship. Though we hope it won’t be necessary, our Hadassah Medical Organization doors in Jerusalem remain open to all who may need our care.” said Ellen Hershkin, Hadassah National President.