Hadassah Participates in Worldwide Breakthrough of Genetic Links to Diabetes 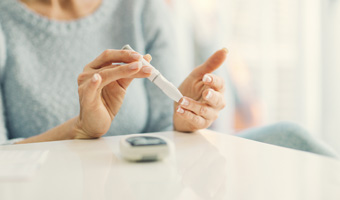 More than 300 scientists from 22 countries, including the Hadassah Medical Organization’s Prof. Benjamin Glaser, have found that most of the genetic risk for developing type 2 diabetes can be attributed to common, shared differences in the genetic code, each of which contributes a small amount to an individual’s risk of disease.

For over the last 15 years, Prof. Glaser has led the Middle East charge on type 2 diabetes and its genetics. “When we started working on this, almost two decades ago,” he relates, “we naively thought that we could find the genetic cause of diabetes by studying a thousand individuals using a few hundred genetic markers. We now know that we need to study hundreds of thousands of individuals, using millions of genetic markers, just to begin to understand the genetics of this common and devastating disease. It has been a true honor to be among the world’s best in such a ground-breaking study.”

The research, which involved a comprehensive investigation of the underlying genetic architecture of type 2 diabetes, unveils the most detailed, unprecedented look at genetic differences that heighten a person’s risk for development of the disease. It also identifies several promising targets for new treatments. As the researchers explain, they found over a dozen genes in affected participants where changes in the DNA sequence altered the structure or composition of the proteins they encode, suggesting that those genes and proteins are directly involved in the development of the disease. By the same token, these changes provide important clues as to the mechanism by which they confer risk. Understanding the possible mechanism, in turn, provides possible clues to new drug targets.

Given these genetic findings, the researchers suggest that any personalized approach to treatment and prevention of type 2 diabetes needs to be tailored on the basis of an individual’s broader genetic profile, as well as environmental factors.

Highlighted in the July 11, 2016 online issue of Nature, the study was led by researchers at the University of Michigan School of Public Health, the Welcome Trust Center for Human Genetics at the University of Oxford, the Broad Institute of Massachusetts Institute of Technology and Harvard Medical Center, and Massachusetts General Hospital. DNA from 120,000 individuals was examined to pinpoint genes and their variants which influence diabetes, yielding the more complete picture of the number and characteristics of the genetic variants.

Head of Research and Development at Hadassah, Prof. Eyal Mishani, notes that “the collaborative nature of such a project demonstrates the power of the masses and paves the way for many exciting advances in human medicine.”