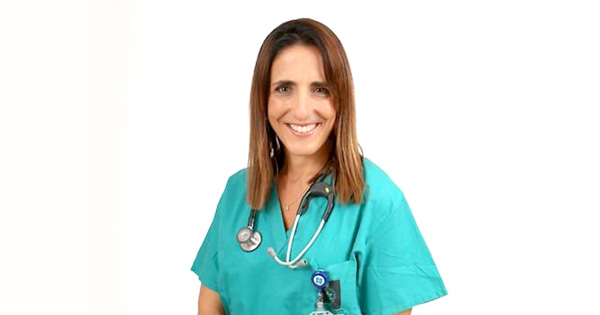 Prof. Malena Cohen-Cymberknoh, director of the Hadassah Medical Organization’s Pediatric Pulmonology Unit and Cystic Fibrosis (CF) Center, has been named by Israel’s Ministry of Aliyah and Integration as one of five immigrant “success stories” for 2021.

The honor is given to immigrants who came to Israel after 1983 and who have excelled in various fields from medicine to science to sports. “This prize represents so much to me,” Prof. Cohen-Cymberknoh relates. “It reminds me of myself as a recently graduated physician for whom Hadassah opened its doors and put its trust in me. It gives me even more motivation to continue in the path I am on, with so many projects still to be accomplished.”

Originally from Buenos Aires, Prof. Cohen-Cymberknoh had always wanted to live in Israel. That dream became a reality in 2000 after she finished her medical degree at the University of Buenos Aires Faculty of Medicine. Her husband, Ariel, a computer engineer, had been offered a position at Intel Jerusalem the year before.

When the couple immigrated, they had one son, Tobias, age 1½. Now they have three other children.

“One of my dreams was to work at Hadassah,” Prof. Cohen-Cymberknoh says. “In 2003, this dream came true.” With residencies in both pediatrics and pediatric pulmonology, she has held her current positions since January 2021.

In 2008, Prof. Cohen-Cymberknoh began bringing her knowledge and experience in the field of CF to other countries, particularly developing nations in South America. From 2010 to 2014, at the request of Israel’s Ministry of Foreign Affairs, she planned and initiated the development of the first CF Center in Uruguay. In July 2019, Prof. Cohen-Cymberknoh was asked to help Panama create a CF Center there. She met with the Panamanian health minister and other public health leaders, and, together, they began the work to bring the CF center to fruition. “Unfortunately,” she relates, “due to the COVID-19 pandemic, this project had to be put on hold.” Prof. Cohen-Cymberknoh is hopeful that she and her colleagues will able to continue with the project soon.

Over the past 10 years, Prof. Cohen CyberKnoh has been invited by local and government officials in Argentina, Chile, Panama and Uruguay to teach CF medical and para-medical staff how to treat patients according to the standards she and her colleagues developed at Hadassah. She explains, “The treatment of CF, a multi-systemic chronic disease diagnosed mostly in childhood, requires a holistic approach. The entire family needs to be involved in the patient’s care, an important aspect at our CF Center.”

Prof. Cohen-Cymberknoh is also a consultant to Latin American colleagues on how to best navigate the COVID-19 pandemic with respect to treating CF patients. For the last year and a half, she has been providing presentations and consultations remotely, but she hopes that in 2022 her outreach can resume in person.

Prof. Cohen-Cymberknoh is involved in many CF clinical research projects, including several multinational studies, where she is the principal investigator working with CF centers in Europe, South America and the US.

In 2017, Prof. Cohen-Cymberknoh was invited by the Jewish Agency for Israel to join a delegation to Argentina to promote aliyah. Since then, she has given virtual presentations to Argentinians and other Latin Americans who are interested in moving to Israel.

Prof. Cohen-Cymberknoh will receive her award in a special ceremony at the official residence of Israel ‘s President Isaac Herzog on October 10.