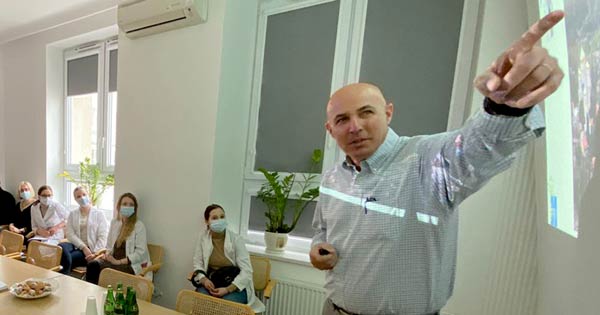 At the request of local hospitals in the cities close to the Polish-Ukrainian border, Hadassah Medical Organization (HMO) physicians on the initial humanitarian mission to Poland created a training video to help their Polish medical colleagues to prepare for the influx of thousands of refugees fleeing the Ukraine. Titled “Mass Casualty Incidents--Lessons Learned, The Hadassah Experience,” the video is a collaborative project of Dr. Asaf Kedar, head of the trauma unit at Hadassah Hospital Mount Scopus, and senior orthopedic surgeon Dr. Shaul Beyth.

“The most important thing,” emphasizes Dr. Kedar in the video, is to be prepared with a plan and to be organized.” The entire hospital, he says, must be prepared, not only the surgical and medical departments. Just as important, Dr. Kedar notes, is being mentally prepared to face brutal injuries and difficult decisions.

“A mass-casualty event changes and affects the work of the entire hospital,” Dr. Kedar explains. The treatment philosophy with mass-casualty medicine, he says, is “the greatest good for the greatest number of victims.” This contrasts with the approach in conventional medicine, where the medical practitioner does the best he or she can for each individual patient.

Providing a sober dose of reality, Dr. Beyth elaborates by cautioning that a mass-casualty event brings with it a feeling of “non-success,” because you realize that in a more conventional situation, you would have been able to achieve a better result for some of your patients. Further, he says, “the more patients you have per hour, the less ability you have to deliver high-quality care.”

In addition, Dr. Beyth zeroes in on some of the things that may very well go wrong—for example, the loss of cellular or broad-band service due to system overload. You may have to go back to conveying information via landline telephones or pen and paper. Personnel shortages will be a given, he says, because they are inherent in the definition of a mass-casualty incident. That’s why recruiting as many hospital staff as possible beforehand is key. “Based on our knowledge and experience,” Dr. Beyth explains, “one in every 8 patients will need surgery; one in every 8 patients will need an intensive care unit bed; all will need imaging.”

Preparedness, Dr. Kedar delineates, involves planning ahead in regard to:

“Once a mass-casualty event starts,” says Dr. Beyth, “there is nothing you can do other than what you have practiced before.”

The Hadassah Medical Organization (HMO) humanitarian mission in Poland has been co-coordinated between the HMO doctors on the ground and Hadassah International (HI). In an ongoing effort to build strategic partnerships, a coalition has been built between HMO and the Polish Red Cross, the World Health Organization, NATAN Worldwide Disaster Relief and the Polish health authorities. Hadassah’s (HWZOA) Ukraine Emergency Response campaign, kicked off in the beginning of the crisis, has successfully raised funds from donors across the US for HMO’s outreach to the Ukrainian refugees in Poland, as well as to provide care for those seeking refuge in Israel, both at Hadassah’s hospitals and our Hadassah Youth Villages.

HI has engaged Polish foundations and individuals in financially supporting HMO’s humanitarian mission. The HI team has assisted the doctors in organizing the logistics and administration of this medical operation—including transporting the HMO doctors during the mission and making sure that they have the necessary medical supplies. They also converse with the refugees that come to the HMO doctors for medical care, provide emotional support, and record their stories, while the HMO medical experts take care of their medical needs.