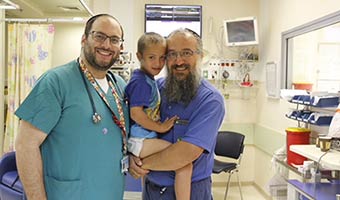 The intensity of his cry alerted Elisha Alush’s parents that something serious had happened to their seven-year-old. He ran in from the backyard of their home near Jericho, north of Jerusalem, screaming, “My foot, my foot.” And then he lost consciousness.

The paramedics rushed him to Hadassah Hospital Mount Scopus, an hour away.

“When he arrived, Elisha was in critical condition,” said Dr. Tamar Kuperman, Emergency Medicine physician at Mount Scopus. “He was on a respirator. His blood pressure was high and unstable. The symptoms were characteristic of poison, but we didn't know from the redness what had bitten him. We guessed scorpion.”

Because Mount Scopus is close to the Judean desert, the Emergency Room staff sees more cases of scorpion bites than many centers, says Dr. David Rekhtman, head of the Hadassah Mount Scopus Pediatric Emergency Room. “It could have been either a scorpion or a black widow spider. If the latter, we would have had to bring in the anti-toxin by helicopter, but we have the antidote for scorpion poison in stock at Mount Scopus. We see at least three cases every season.”

“Elisha is an even-tempered child,” said his father, Doron Alush. “His reaction made me suspect a bite, so we called an ambulance right away.” Because they live in a rural area, to save time Elisha’s mother, Merav, drove out of their farming area to meet the ambulance on the highway. By then, Elisha’s leg was swelling and he was slipping in and out of consciousness. “Her instincts were right about the need for quick treatment,” said Dr. Rekhtman. “Because of everyone’s quick reaction and our relative proximity, we could treat Elisha in the ‘golden hour.’ If he hadn’t come, he would have died, G-d forbid.”

Dr.  Kuperman and Hadassah pediatrician Dr. Daniel Bancovsky were waiting for Elisha at the entrance to the Emergency Room. He needed to be transferred immediately to intensive care. Intensivist Dr. Charlotte Glieksman managed to stabilize the boy. “Fortunately, the poison hadn't reached Elisha’s heart,” she said, but he was in bad shape. “Within a day we had Elisha off the respirator while continuing to provide treatment. Thanks to effective treatment and a good reaction to the anti-toxin serum, Elisha was released to his home in excellent shape after only two days in the hospital.”

Professor Yackov Berkun, Director of Pediatrics at Hadassah Mount Scopus, said, “I am very proud of our staff at Hadassah. They cooperated fully with the paramedics. The Emergency Room and Pediatric Intensive Care physicians worked together to provide the best care for this child. Their ability to cooperate and work professionally together brought about those great results for Elisha.”