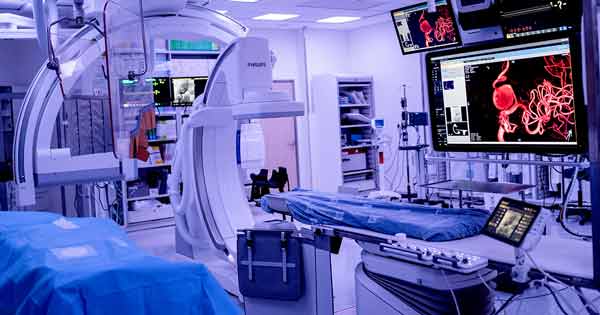 “Combine medieval stories of miraculous healing of the sick with the banks of monitors, sensors and technological know-how in use at the Hadassah Medical Organization (HMO), and what do you get? The cutting-edge operating room of today.” So writes Wendy Elliman in her March/April 2022 Hadassah Magazine article.

At HMO, robotic technology and groundbreaking techniques developed at Hadassah, as well as the new six-million-dollar neuro-angiography suite, make it possible for surgeons to avoid long surgeries under anesthesia and, instead, perform minimally invasive procedures under a local anesthetic in less than 20 minutes.

Take the case of a 21-year-old construction worker, who fell from a ladder and broke his back. Thanks to Hadassah’s specially trained surgeons and their robot-assisted techniques, the man was able to walk out of the hospital unaided three days later.

Dr. Josh Schroeder, director of Hadassah’s spinal deformity unit who performs about 25 robotic surgeries each month, explains further, “With the robot acting as a kind of GPS, pinpointing the location to the millimeter, and screwing the tiny spinal screws into exactly the right place,” we are able to use a “minimally invasive needle puncture through the skin,” instead of performing traditional surgery which would take hours and be followed by weeks of hospitalization.

A 73-year-old woman, for example, was brought to Hadassah able to move only her head due to an infection that caused intense pressure on the nerve sac around her spinal column. Surgeons elsewhere told her they were unable to operate because of her age and numerous health conditions. Dr. Schroeder and Dr. Cohen successfully alleviated her problem with minimally invasive surgery. Just 72 hours later, she was able to walk out of the hospital.

When a two-ton steel wall fell on a factory worker, fracturing six spinal vertebrae and his shinbone, Dr. Schroeder was concerned about using standard robotic surgery on a patient with multiple fractures. Traditional surgery, he knew, would involve significant blood loss. So Dr. Schroeder designed a dual-robotic procedure—a global first. He positioned an imaging robot, the German-made Siemens Artis Zeego, above the patient to transmit precise real-time, three-dimensional images. He then used the Israeli-made Mazor Robotics Renaissance Guidance System to insert 11 screws and connect them to a rod in the man’s spine. A few days later, the man was able to walk to rehabilitation therapy.