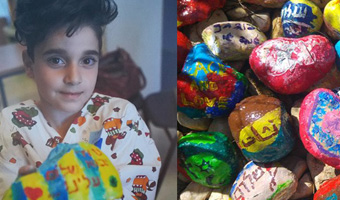 Stones have long been instruments of conflict in Jerusalem, where Hadassah’s Mount Scopus Hospital is located. But Hadassah conceived of a new use for stones with its Stones for Peace Project.

The pediatric staff asked the children in the hospital school to paint stones to express their belief in peace. A photograph of a young child holding her “stone of peace” was chosen as one of five winners in a photo contest, sponsored by USAID-ASHA (United States Agency for International Development-American Schools and Hospitals Abroad).

When conflict outside the Hadassah Hospital campus escalated, Hadassah launched this project to empower children to choose peaceful means of resolving conflicts. Part of the children’s educational curriculum is a unit on conflict resolution. Painting the stones was a natural outgrowth.  After the stones are painted to the satisfaction of the little artists, they are transferred to the fountain in the Healing Garden, just outside the Center for Children with Chronic Diseases.

Long-term patient Mohammed Abdeen, age 18, whose recent photo exhibit was displayed at Hadassah-Mount Scopus, took the winning photo. The photo was put on display at the USAID/ASHA Annual Partners Conference at the Crystal Gateway Marriott Hotel in Arlington, Virginia.

USAID’s ASHA office provides assistance to schools, libraries, and medical centers outside the United States which serve as a demonstration of American ideals and practices. ASHA grants an average of one million dollars each year to Hadassah. The aim of its annual photo contest is to “to tell the story, through photographs, of the American Schools and Hospitals Abroad (ASHA) mission and the accomplishments of its partners in improving healthcare and education worldwide.”