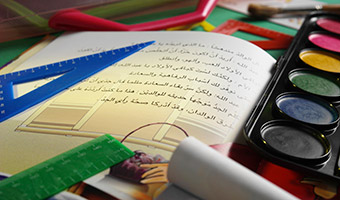 Education Is The Key To A More Hopeful Future
Hadassah believes education can save lives and generations of Hadassah members have made fighting for healthier, more tolerant societies a cornerstone of our advocacy efforts. Today, hundreds of thousands of Palestinian children are being taught from a curriculum in schools administered by United Nations Relief and Works Agency (UNRWA) that includes hatred, incitement and anti-Semitism. As the world’s largest UN-recognized Zionist organization, Hadassah advocates for curriculum reform before world leaders and in Washington in the hopes of building a brighter future.

Last month, a key UN committee issued a landmark finding that the Palestinian Authority’s curricula “fuels hatred and may incite violence, particularly hate speech against Israelis, which at times also fuels anti-Semitism.” And in Washington, D.C., Members of Congress are organizing behind legislation that will hold UN and Palestinian officials accountable for what’s taught in classrooms every day.

Take Action Now
As always, we have the power to make an impact together. Before world leaders gather for the next UN General Assembly this month and hear appeals for contributions to UNRWA and its schools, you can help Hadassah keep building momentum behind reform efforts: