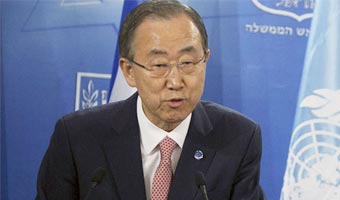 Iran is holding its third annual Holocaust cartoon contest, trivializing the memory of the six million Jews who perished. In response, the following letter was sent from Hadassah National President, Ellen Herskin to Secretary General of the United Nations, Ban Ki-moon urging him to publicly condemn this disgraceful event.

As President of Hadassah, the Women’s Zionist Organization of America, I urge you to publicly condemn in the strongest possible terms, Iran’s determination to hold its third International Holocaust Cartoon Contest.  This so-called contest celebrates anti-Semitism and desecrates the memory of the six million Jews who perished because of this insidious ideology. Allowing anti-Semitism to go unchallenged threatens the foundational principles and charter of your organization, the United Nations, founded in the wake of the Holocaust.

Since Hadassah’s founding in 1912, we have combated the growth of global anti-Semitism, anti-Zionism and neo-Nazism wherever it may appear. The world is now seeing yet another rapid surge in anti-Semitism. After the atrocities of the Holocaust, the world pledged “Never Again.”  70 years later, it is unimaginable that a country that sits on the international stage, as a member state of the United Nations, continues to threaten to eliminate another member state, the Jewish State, and continues to hold conferences and contests denying one of the 20th century’s gravest moral stains.

Iran continues to violate international law and destabilize the Middle East with its continued financial, military and moral support for global terrorism, and it is determined to spread anti-Semitism and anti-Zionism through its grotesque propaganda.

On behalf of Hadassah’s 330,000 members, Associates and supporters, I urge you to condemn Iran’s intolerable commitment to spreading anti-Semitism for the sake of all humanity.

Thank you for your understanding.