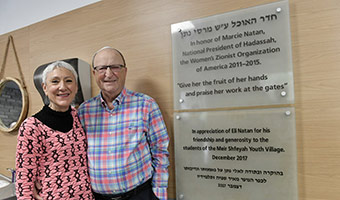 The Meir Shfeyah Youth Village orchestra opened the dedication program for the Marcie Natan Dining Hall with a song called “Light.”  A dozen high school students played their mandolins under the baton of teacher and maestro Boris Feldman. “Even when I close my eyes, I can feel the light shining inside me,” goes one of the verses of the famous song.

The day after Hanukkah, the unusually warm winter weather and sunny skies were the ideal background for a day full of illuminating moments:  the Dedication of the Marcie Natan Dining Hall and a surprise thank-you to Marcie’s husband, Eli Natan, for the help he has afforded graduates of the Meir Shfeyah school. Marcie Natan is the immediate past National President, and was honored by Hadassah, the Women’s Zionist Organization of America with the naming of the Dining Hall. The dining hall underwent extensive renovations to make it more comfortable, accessible and attractive. 650 teens eat there and use the hall for village-wide social events.

Hadassah village liaison Lauren Stern Kedem, retried English teacher, emceed the formal December 21 program, attended by a wide circle of Israeli friends, educators, and officials. Fittingly, it took place in the Nancy Falchuk Enrichment Center, dedicated last March in honor of Marcie Natan’s predecessor as National President. The dedication program included a presentation by a group of teens who had just returned from a Hanukkah mission to Ethiopia. “We learned so much about where our parents came from,” said Elishaya Farada an 11th-grader who went on the trip. “I so much appreciated the culture in Ethiopia, while realizing that our culture in Israel is already different, even though we speak Amharic at home. I saw how hard life was there, with women carrying sticks on their back and none of our conveniences, but at the same time admiring how they take pleasure in small things.”

Meir Shfeyah 12th-grader Tania Chekalina, born in Orel, Russia, serenaded Marcie Natan with a lyrical rendition of “Woman of Valor.” Chekalina came to Israel three years ago on the Na’eleh program, which, as a continuation of Youth Aliyah, allows high school students to study in Israel. “My older brother came to Israel to serve in the IDF,” says Chekalina. “When I decided to come to study in Israel it was tough on my Mom but she backed up my decision to go because she said I’d have a future here.”

Meir Shfeyah is named for Amschel Mayer von Rothschild, founder of that revered dynasty. The first school was started there back in 1904, providing education for the orphans of the Kishinev pogroms in Bessarabia (today Moldova). In 1923, Jerusalem orphans from the Diskin Orphanage on Hanevi’im Street were moved there. The red-roofed village was used as a training base by the Haganah because of its then-remote location in a hilly area. There’s an excellent computer program but the students still work in agriculture, what the former director used to call “para-psychology” for the Hebrew word for cow – para. The village boasts a prize-winning dairy and a winery that uses its own grapes. Today, many students, like Chekalina and Elishaya come from the former Soviet Union and of Ethiopian families. Others are sabras from difficult backgrounds. The student body includes foreign workers too young to work legally, and teens from the nearby upscale towns who value the excellent schooling in the village. They are bused in at their request.

HWZOA has supported Meir Shfeyah since Hadassah founder and first president Henrietta Szold received the village as a gift from the Baron Edmond de Rothschild in 1923.

"We are very proud and privileged to be associated with this village and the wonderful work being done here," said Marcie Natan. "It's so fulfilling to be continuing the vision and legacy of Henrietta Szold."

Among the many guests at the dedication was Alex Osadchi, a former student the Natan family supported through this higher education. He had two pieces of good news to announce: his recent engagement and being tapped for a job in a top graphic company.

The unveiling of Marcie Natan's name on the outside of the dining room, the attachment of a beautiful wood mezuzah made by a Meir Shfeyah craftsman and the unveiling of a special thank-you plaque for Eli Natan were only overshadowed by the exclamations over the tasteful and aesthetic renovations of the dining room, and the delicious aromas wafting from the renewed kitchen.

And then the lunch break came, and the teens were filling their trays with salads and antipasti, rice and chicken. The room was full of the talk and the laughter of teens enjoying a healthful lunch while growing into confident young adults.

Learn more about Hadassah Youth Aliyah, which sets at-risk children in Israel on the path to a successful future. Since 1934, over 300,000 young people from 80 lands have graduated from Youth Aliyah.