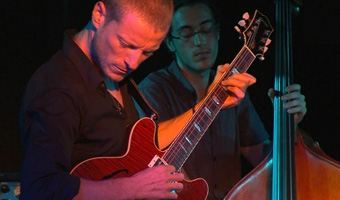 Whenever renowned jazz guitarist Dekel Bor, 36, returns to Israel, he indulges the passion second only to music: motorcycling. He belongs to the Israeli Dukati motorcycle club and goes out on speed rides through the countryside.

In the fall of 2015 Dekel headed off on a Saturday morning ride with friends toward the Dead Sea. "It was heaven, but I knew we were going too fast” he commented. They were speeding at 180-190 kilometers per hour. There were treacherous curves and suddenly Dekel leaned in too deep, took a left turn, hit a rock, tried to lift himself back to an upright position, but instead he hit the safety belt, flew above the bike and landed in a ditch by the side of the road.

He was in agony. "A doctor who was riding with us, said it was no big deal, just a shoulder knocked out of joint.” Dekel's friend called for an ambulance, but Dekel refused to go inside unless he was taken to Hadassah Hospital. “I live both in Israel and in America, and the Hadassah brand has always been strong."

Dekel realized that he couldn't move his fingers and thought his spine was severed. It wasn't, but he was badly hurt. Dr. Miklosh Bana, told Dekel that he had a hole in his lungs and chest, internal bleeding, four broken ribs, and a detached collar bone and scapula. "I realized I might die. He read my mind. 'Don't worry, we're going to save your life,' and I believed him, although I was still scared." Dekel was taken first to intensive care, then to general surgery, and last to orthopedics, where his floating shoulder was re-attached by experts Professor Ram Mosheiff and Amal Khoury.

Dr. Amjad Faran, a pain expert, doing residency at Hadassah from Jordan, helped Dekel cope with the pain that kept him “screaming all night.”  Currently Dekel is recuperating at home with his parents in Kiryat Ono. According to Dr. Khoury, he'll be able to perform again soon. "I'll be back to Hadassah to give a benefit concert. You gave me my life, and I want to give back."