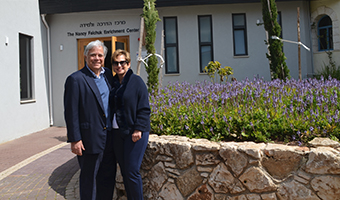 The teenagers who live and study at the Meir Shfeyah Youth Village were gifted with the Nancy Falchuk Enrichment Center, a beautiful new facility where they will get help on their homework, prepare for exams and engage with each other. The large study hall, donated by Hadassah, The Women’s Zionist Organization of Amerca (HWZOA), is adjacent to the village synagogue and is encased in glass windows that look out on the Carmel Hills. The Center was dedicated in the presence of Nancy Falchuk, a former operating room nurse and medical administrator who also served as Hadassah's 24th National President from 2007-2011. Also in attendance was her husband Dr. Kenneth Falchuk, and a large group of friends and colleagues, including Hadassah Youth Aliyah Chair Carol Goodman Kaufman.

"I am grateful to have so many of you—all proud Zionists—here with me," said Falchuk. "I began my life in Hadassah when I was a little girl making place cards and cookies in my mother's kitchen. I grew up in a household in which supporting Israel was an ultimate value."

Baron Edmund de Rothschild bought the land for Meir Shfeyah, near the other agricultural colonies of Zichron Yaakov, Binyamina and Pardes Hanna in the late 1880's. In 1923, he gave the village to Hadassah-founder Henrietta Szold, who directed children, who were escaping Nazi Europe, to this residential educational center, beginning in the 1930's. With its dorm and high school, Meir Shfeyah has continued to be a refuge for children and teens from war-torn countries, as well as those who come from disadvantaged and immigrant families.  Over 300 teens live in the village, joined by a similar number of students from nearby towns who elect to study in the high school because of its outstanding educational standards.

Students receive tutoring on their homework and individualized help to close educational gaps. The new complex includes offices for the school psychologist and counselors.

The Falchuks’ daughter Aimee Falchuk from Boston, wrote "My mother's passion and unyielding loyalty to helping repair the world has been the most significant teaching I have ever received from her."  Her sons Evan and Bradley from Boston and Los Angeles, respectively sent this message, "We have been fortunate to watch our mother travel the world to bring Hadassah’s message of peace, healing, understanding and community. We have watched as she has tirelessly worked to build bridges made of science, medicine and learning between communities that were once thought to be impossible to connect.  We could not be happier that this enrichment center will bear your name.  It’s so fitting that a place where students will gather to learn, connect and prepare will be named for a woman who spends her life helping all of us do those things."

The dedication program included musical interludes by the Meir Shfeyah legendary mandolin orchestra, with soloists from Israel and the former Soviet Union.

The day's ceremonies also included a tribute to Hadassah Past National President Deborah Kaplan, who died on February 27, 2017. Hadassah's 25th National President Marcie Natan recalled how Kaplan urged a group of leaders who were at a Hadassah Convention in Israel to meet Russian immigrants arriving at Ben Gurion Airport at 2:00 am. "We were there in the middle of the night on the tarmac when they arrived, some carrying babies in their arms, others so old and infirm it was hard for them to climb down the stairs. But we all danced together in an expression of Zionism that changed our lives and stayed in their hearts." Kaplan's favorite song, Al Kol Aleh, was sung in her memory, led by National Board Member and Past National Vice President Barbara Spack of Metuchen, NJ.

Also recognized for her contributions to Hadassah and Junior Hadassah was Shulamith Schwartz Nardi, an American Jewish woman who served as an emissary for Israel, a professor and an advisor to five presidents. Hadassah-Israel past President Annabelle Yuval described the help Nardi had given to her when she made Aliyah in 1951 and how she loved and supported Hadassah members and Meir Shfeyah Youth Village.

The ceremony was coordinated by Hadassah's Office in Israel and the Meir Shfeyah Youth Village staff.