No Peace in Gaza's 'Peaceful Protest' 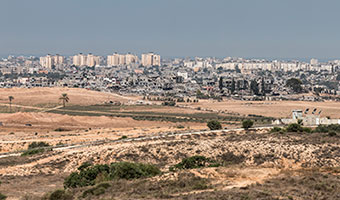 Hamas is leading a violent protest on the border between Israel and Gaza with one clear, openly stated purpose: to break through the tactical fence and enter Israel, marching all the way to Jerusalem in what Hamas is calling a “March of Return.” According to an IDF spokesperson who spoke to Hadassah representatives in the US, on the condition of anonymity, the protests are planned to last until May 15, with large demonstrations every Friday, and culminating on what Palestinians refer to as Nakba day or “the great catastrophe,” referring to Israel’s War of Independence that displaced many Palestinians.

To achieve this goal, Hamas is using civilians as human shields, bussing in tens of thousands, and even sending a 7-year-old girl right up to the fence, in order to provoke a violent response from the Israel Defense Forces (IDF), and show the world that they are peaceful protestors.

Peaceful protests include people holding signs, singing songs, and assembling to demand change from their leaders. What is actually going on in Gaza is a violent riot. They are using fire bombs, throwing heavy stones, Molotov cocktails, hurling burning tires and sending military operatives and civilians alike (including women and children) up to the tactical fence in order to penetrate it and rush through into Israeli territory. Just two days ago, several young men managed to break through the fence in the middle of the night using what appeared to be a pipe or metal bar; two men briefly broke through to the other side, then returned to Gazan territory.

The riots have already cost Hamas more than 10 million dollars. This money could have been used to renew electricity to the Gaza strip, or to improve infrastructure for hospitals, schools and homes. Despite the ongoing escalation, Israel opens the Kerem Shalom border crossing every day (except on Shabbat), facilitating hundreds of trucks filled with humanitarian aid going into the strip. There is no other way into Gaza; even Egypt has closed its border.

The IDF has killed 17 Gazans since the riots broke out on Friday, March 30. Of those 17, 12 are known militants of Hamas’ military wing or the Islamic Jihad group. “Maybe there are things we can do better. Maybe there are things we can do different. They tried [to show] that Israel will kill women and children and sends them to the fence on purpose so the world will see that Israel kills women and children. But we don’t,” said an IDF spokesperson. The IDF, he asserts, is doing everything it can to prevent casualties while keeping its border and its citizens safe. Furthermore, he continued, if there was no terrorism, there would be no fence. Israel is not attacking, it is directly responding to violent threats and acts against its sovereignty and its people. Hamas’ charter clearly states the complete destruction of the State of Israel as one of its major tenets.

Hundreds of IDF soldiers could not be at home to celebrate the Passover holiday with their families, and those Israeli civilians who live just 100 meters from the fence spent the holiday in fear, rather than relaxing and enjoying one of the most special days of the Jewish calendar with their loved ones.

This is also negatively impacting the lives of those who live in Gaza, potentially having dire environmental consequences. Videos and social media posts show hundreds of tires being gathered near the border, amid calls for this Friday’s “protest” to be one of burning thousands of old tires to engulf the border fence with smoke and flames, making it impossible for IDF soldiers to see. In reality, cautions Maj.-Gen. Yoav Mordechai, the coordinator of government activities in the territories, it is all of Gaza that will be choked with smoke. Smoke from burning tires is carcinogenic and has damaging effects on the immune and respiratory systems. It would also have disastrous effects on local flora and fauna.

Hadassah, The Women's Zionist Organization of America, Inc. is deeply troubled that the UN Security Council met for an emergency session on the situation in Gaza on Friday, March 30, despite requests to postpone from the Israeli and US delegations as it was both Shabbat, and the beginning of the Passover holiday.

While many major media outlets continue to vilify Israel’s actions, painting it as an aggressive “terror state,” we urge you to be vocal about the realities on the ground, and get the truth out as widely as you can. We stand for a strong US-Israel relationship that is unwavering and steadfast. May we choose the path of peace.