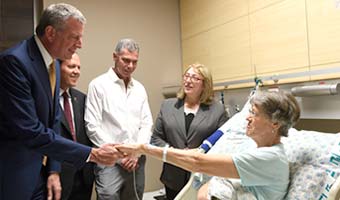 Mayor de Blasio talked about the “spirit of solidarity” and the “common destiny” between the citizens of Jerusalem and New York City. He said, “Let me thank Hadassah Hospital; the stories I have heard, in the midst of this pain, are inspiring and, somehow, life-affirming.”

Mayor Barkat talked about patients they had met: Maria, a Christian woman who was a foster mother to 20 Arab children through the years, who was stabbed in the chest; Pesach, an elderly man who suffered a severe knife attack while waiting for a bus, among others