Recalling Miracles That Hadassah Brought to Life in 2021 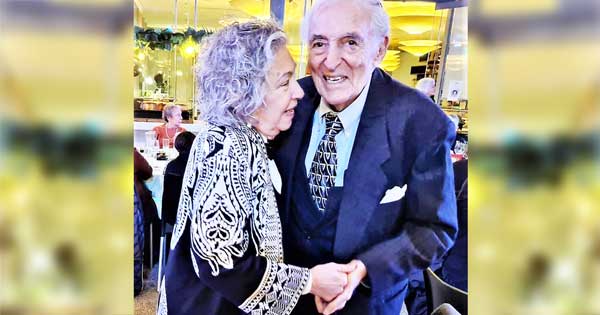 During this holiday season, many of us pause to appreciate the miracles that saved the Jewish people long ago and those that continue to uplift our own lives. Barbara Sofer, Israel director of public relations at the Hadassah Offices in Israel, reminds us of just some of the miracles that the Hadassah Medical Organization and Hadassah Neurim Youth Village accomplished during this past year in her recent mini-Netletters*. Consider these miraculous achievements:

What a sense of excitement greets Hanukkah in Jerusalem, which begins before sunset tonight. The tradition in town was to have the lights on at dusk when people left the marketplace. Because we now have electric lights in the outdoor markets too, many light after dark. Many Jerusalemites, like us, light our Hanukkah menorahs in special boxes on the street. But whether they are illuminating balconies, windowsills or the street, the lights brings us joy, hope and pride. It's time to remember some of the miracles of the year.

Last week I went to a Chicago-sound concert at the Israel Museum sponsored by Hadassah-Israel. I'm a life member of the Tamar chapter. I could hardly believe my eyes when I saw who was the vocalist, belting out the blues. It was Sarah Lazarus Cohen, a former Young Judaean I wrote about because she served as a surrogate, giving birth to twins for a couple who couldn't have children. Delivered at Hadassah Medical Organization, of course!

"I'm feeling fine," said Sarah, who certainly sounded fine. "The twins have turned six months and when I light my candles this year with my supportive husband and three children, I'll be thinking of the miracle I could be part of for this family. Hanukkah Sameach!"

Read the whole story if you have time while the candles are burning.

‍At the recent Hadassah-Israel Special Gifts concert I mentioned in yesterday’s mini-Netletter, most participants listened and clapped but one couple was quick to leap to their feet to dance to the Chicago-sound music: Dorraine Gilbert Weiss and Barry Weiss.

I kept thinking that they are a poster couple for Hadassah Medical Organization. Back in Los Angeles, Dorraine was the president of her Hadassah group, an active fundraiser for Hadassah Hospital and Youth Aliyah, as well as Southern California Israel and Zionist chair.

She listened to her own speeches and she and Barry made Aliyah.

In the last decade Barry has suffered hip fractures and breaks. Dorraine has had two rounds of cancer, a detached retina and a kidney stone that caused heart failure. She’s in a special program for women’s hearts.

“Hadassah Hospital works its miracles and keeps putting us back together,” says Dorraine, an ebullient great grandmother who turned 76 yesterday on Hanukkah. “Remember in this season of light that everyday you wake up is a day to experience joy. I look at those candles burning and thank G-d for living in Israel and having the blessing of Hadassah medical care.”

‍Rabbi Zeev Katzenbogen, 46, lives in the Jewish Quarter of the Old City with his wife and eight children. He hops down to the Kotel every morning to catch a minyan for prayer. But recently, a terrorist with a semi-automatic weapon went on a rampage nearby. Katzenbogen, in a hurry, was still wearing his tefillin when the bullet hit him in the arm. Although he was moderately injured, the tefillin stopped the bullet from crossing through his arm to his heart.

From his hospital room in the Sarah Wetsman Davidson Hospital Tower he said: "A person got up in the morning to commit murder and I was one of those he tried to kill, in the place where we will celebrate the rededication of the Temple on Hanukkah. I got my life back as a gift and can go home to my wife and children.

"I thank G-d for the miracle of surviving and thank the staff and the supporters of Hadassah for being G-d’s emissaries on earth.”

‍Let us remember that the name Maccabee—given to the Hanukkah heroes who fought for religious freedom and whose efforts on earth elicited a miracle from Heaven—really means “hammer.” (They struck their enemies like hammers.)

So tonight, we fittingly bring Hanukkah greetings from none other than the hammer-throw champion of modern day Israel, Michael Levitan. And he’s one of ours.

Michael was a student and is now a top graduate of Hadassah-Neurim. He made Aliyah by himself from Ukraine and while finding his way and learning Hebrew, he discovered his talent for the hammer throw, one of the the four throwing disciplines in track and field competitions, along with the discus, shot put and javelin. Michael completed studies at Hadassah-Neurim high school as an honors graduate and he is the four-time national hammer-throw champion. He’s such a star that the IDF has named him an elite athlete and allows him to continue living at the village to further his training as part of his service.

He says, “Hadassah Neurim Youth Village gives us teens everything to succeed in life. The village has the best teachers, the beautiful sea, a pool, a surfing club, tennis courts, soccer, basketball, a professional track and field stadium and more. Most of all, there’s the dedicated staff who encourage us to maximize our potential and talents, and the incredible Hadassah members who support the village year after year. Wishing you all, from Hadassah-Neurim a Happy Hanukkah.

‍It’s a jump-shot moment every Hanukkah when the players of Jerusalem’s popular basketball team Hapoel Jerusalem come bearing Hanukkah presents to the sick kids at Hadassah Ein Kerem. Seated quietly in their chairs, the eyes of the boys and girls opened wide as the players entered.

Today’s team was joined by famed player Adi Gordon who told how the idea was born. The players got many Hanukkah gifts from fans and he decided they should give instead of getting.

Each player passed out a backpack full of gifts to the children.

Dr. Shimon Reif who heads pediatrics said that Hadassah and Hapoel are on the same team because part of every child’s exam today is a question about how many hours of sports he or she plays, now seen as an essential part of good health.

Speaking for the children in Hebrew and English was Boaz Motro, 10. Wearing Hapoel’s bright red colors he thanked the players in English and Hebrew. (You can watch his brief English speech here.)

No latkes for Boaz. Born at Hadassah with a rare digestive condition, Boaz Motro was diagnosed by senior pediatric gastroenterologist Dr. Mordechai Slae as having PIPO, a rare condition in which food doesn’t move through the digestive tract. That doesn’t stop him from attending many basketball games, from singing and excelling in fourth grade.

“Hadassah has saved my son’s life more times than I can count,” says Mom Noa Motro, who works for the Israel Nature and Parks Authority. “We live 15 minutes from the hospital and the moment we get here both Boaz and I feel safe. I’d like to tell the members of Hadassah that every day they are changing the life of my son and so many others. I wish them the feeling of support and love that we get from you. Happy Hanukkah!”

Let's think of Boaz and his mom Noa when we light candles tonight.

How can we have a season of Hanukkah mini-Netletters without including Dvir Musai, terror survivor/Hadassah patient/docent of the Hadassah Herzstein Heritage Center in Hadassah Ein Kerem? This year Dvir, 33, was honored with lighting the giant Hanukkiyah in the Mamilla Mall entrance to the Old City. And how fitting! His name, Dvir, means the Holy of Holies, interior sanctuary in the Jewish Temple rededicated on Hanukkah.

The thousands of you who have met Dvir know his story, how when he was 13 on a school fieldtrip to a farmer's cherry orchard he stepped on a mine set to murder the farmer. Dvir was catastrophically injured.

"Thankfully I was taken to Hadassah Hospital," Dvir says.

I remember on that day, 20 years ago when chief trauma surgeon Avi Rivkind looked at Dvir's chart and put his head down on the table.

"This youngster will be our patient for the rest of his life,” predicted Rivkind.

And he has been. Thirty-plus operations later, he's grown up at Hadassah Medical Organization. His first date with his beautiful wife Orly was at the hospital when he was waiting for an appointment. His surgeon said one of the blessings under his chuppah and his two children were born in the Hadassah delivery room. He would have been excused from military service because of his horrendous injuries but he volunteered and became an anti-terror expert, even tutoring the US Marines.

He has not only become a vocal spokesperson for Hadassah, but is a model of a once angry young teen to a mature and articulate advocate of equal rights. Says Dvir this Hanukkah to all of you: “If I can have so many miracles, so can you! Keep striving for the light when everything around you is dark. Thank you for all the light you've brought to my family."

Let's think of Dvir and his family as we light the 6th candle.‍

The final shout out of the Hanukkah week is to Hadassah's nurses. This week, the first cadre of nurse graduates in the Achotenu program for Ethiopian-background Israelis were honored at the residence of Israel’s president.

The Hanukkah miracle involves a single sanctified cruse of oil that lasted for eight days. But without the foresight of whoever hid that single cruse, there wouldn't have been a miracle. Henrietta Szold had that foresight when she started Hadassah, the Women's Zionist Organization of America in 1912 and in founding the first professional college for women: the School of Nursing that now bears her name. The year? 1918, the year of the last pandemic, seven years before the Hebrew University was founded. Hadassah nurses saved the country.

Patricia Wahl Lapan had foresight, too. She left home at 16 to study nursing. She didn't inherit the money she donated to Hadassah, the Women's Zionist Organization of America of which she was a member. She earned it and invested it wisely so that she could make a bequest for the women of Hadassah to use with foresight. There were many good ideas for that scholarship money, but together with her family, the decision was made to pay for Achotenu, to ensure that tuition costs and university expenses would not derail worthy students who want a career in nursing.

"Achotenu is such a wise, important project because it doesn’t ignore the difficulties of Aliyah and absorption but alongside them it looks at the enormous advantages and the amazing opportunities brought by Ethiopian immigration to all of Israel,” said Israeli First Lady Michal Herzog during the ceremony.

To the new nurses Herzog added: “You chose to study nursing, to break glass ceilings in the world of academia. You opted to study despite the dissenting voices you may have heard that suggested this course of action is not really for you. But you chose to study realizing that you are ambassadors for an entire community, knowing that your success is theirs too.”

HOI Executive Director Audrey Shimron spoke of Hadassah's history and brought congratulations from our 300,000 members in the United States, of President Rhoda Smolow and also past President and proud nurse Nancy Falchuk. She brought blessings of men and women around the world of Hadassah-International particularly in faraway Australia where the new graduates have friends and supporters.

And she said, "We know each one of will be you will be a lamplighter. Mazal tov."

Let's think of how proud we are to be part of Hadassah's enormous contribution to the State of Israel as we light a full Hanukkah tonight.

*An entry for the 7th night was not published as this night fell on Shabbat.