Rejoice With Jerusalem: A City in Focus 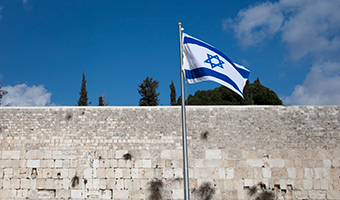 Sisu et Yerushalayim, gilu vah,gilu va kol ohaveiha, kol ohaveiha!
(Rejoice with Jerusalem, be glad about her, be glad all you that love her)

How does one best celebrate Jerusalem? Let me count the ways.

Our traditional liturgy is full of prayers for the building of Jerusalem, G-d’s holy city, speedily and in our lifetime! Amen. We pray for God to spread a tent of peace over us, over Israel, and over Jerusalem. And it is Jerusalem that we identify as the source of the word of G-d as we begin the Torah service.

The Psalmist cries out:
"If I forget thee, O Jerusalem, let my right hand forget her cunning.
If I do not remember thee, let my tongue cleave to the roof of my mouth; if I prefer not Jerusalem above my chief joy."
Jerusalem, built over 3,000 years ago by King David, and the home of the Bet Hamikdash (the Holy Temple) built by his son Solomon, has evolved into a holy city for Judaism, Christianity, and Islam. The Temple Mount, where the Kotel (the Western Wall, formerly known as the Wailing Wall) draws the Jewish people to the only remnant of the ancient Temple, is also home to the Dome of the Rock and its adjoining mosque. Ironically, this holy space has become the flashpoint for tension, rather than cooperation and peace. Jerusalem is also the place where Christians believe Jesus lived, was crucified and resurrected.
Today, the city of Jerusalem is home to religious institutions of all types, including the major streams of Judaism, countless yeshivas and seminaries, and other homes of Jewish learning including the Shalom Hartman Institute, Pardes, Hebrew Union College, and the Conservative Yeshiva, which attract large numbers of American learners.
Jerusalem is easily celebrated as a center of secular education as well, with Hebrew University, Hadassah Academic College, the Bezalel Academy of Art and Design, Jerusalem Academy of Music and Dance, the Sam Spiegel Film and Television School, Shalem College,and several teacher-training colleges. Additionally, NYU, Brigham Young University, Yeshiva University, and the University of Indianapolis maintain campuses in Jerusalem.
The city is home to 33 museums of all descriptions. Notable among them are the Israel Museum, which also houses the Shrine of the Book, and Yad Vashem, the Holocaust memorial and educational museum. There are art museums, archaeology museums, and museums of politics and history. Clearly there is much to celebrate in the city also referred to as Zion.
Jerusalem is the source of not only spiritual, but also artistic and cultural acclaim. The Jerusalem Cinematheque, hosts an international film festival annually. The Jerusalem Biennale for Contemporary Art 2015 was the first in a series of exhibitions designed to define and explore contemporary Jewish art. Indeed, there have been countless songs written about the city as well as poems, stories, and films. Contemporary films set in the city include AKA Nadia, and David Broza’s East Jerusalem/West Jerusalem.
Perhaps the most well known of the songs written about Jerusalem is Naomi Shemer’s Yerushalayim Shel Zahav, Jerusalem of Gold, written in the late spring of 1967. The song begins as a lament for the divided city, but is rewritten as the events of the Six-Day War unfold and we return to the holy and profane place from which we were barred. The title of the song refers to a golden brooch Rabbi Akiva made for his wife marking his long absences from her as he studied in Jerusalem. Shemer toured IDF outposts during the Six-Day War where she sang her song and the soldiers sang it back to her.
Jerusalem also has a reputation for iconic foods, including the sweet and savory Jerusalem kugel. Jerusalem’s grill restaurants (steakiyot), are famous for a mixed-grill dish called Jerusalem Grill. There is a distinctive restaurant culture featuring all manner of ethnic cuisines that has sprung up in Jerusalem’s unique indoor/outdoor shuk, Machane Yehuda, that also includes boutiques, street art, fine crafts,and special events.
For Hadassah, Jerusalem is our home. Our hospitals in Ein Kerem and on Mt. Scopus are our pride and joy! The return to Mt. Scopus in 1967 resonates for all of us as our commitment to Hebrew University and to our hospital were renewed 50 years ago. Certainly, traveling to Jerusalem on the O Jerusalem! 50th Reunification Mission
led by Hadassah National President Ellen Hershkin, is the best way for anyone to rejoice with Jerusalem. Those who can't travel to Jerusalem can celebrate from afar with a film screening, a book discussion, a night of reminiscences about our times in Jerusalem, a night of Israeli music focused on Jerusalem — the possibilities are limitless.
Back to Hadassah Stories