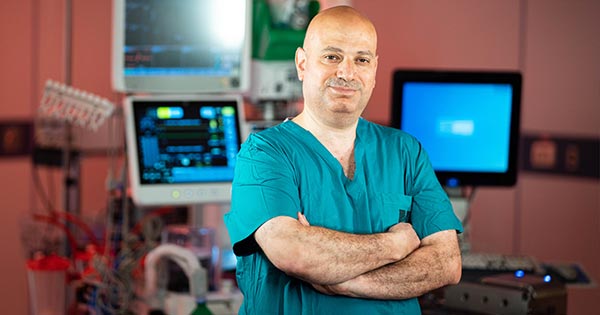 The usual course of treatment in an intensive care unit (ICU) is receiving unconscious patients after an accident, surgery or terror attack, marking daily improvement and gradually bringing them back to consciousness.

“Patients are awake and experiencing the beginning of breathing problems, and we have to prevent them from getting worse. They see other patients on ventilators and panic, terrified that they will be next. They’re speaking to their loved ones on their cellphones and then, if their condition worsens, are no longer able to communicate. We always deal with challenging cases in the ICU, but there was huge emotional toll trying to save the many COVID-19 patients.”

The staff needed to improvise and come up with innovative ideas, for which Dr. Hashem is uniquely qualified because of his unusual educational background. He grew up in Nablus, the son of two elementary school teachers, and one of six children. When he graduated from high school in 1986, he wanted to study medicine, but there were no medical schools in the Palestinian areas.

He couldn’t yet afford to study abroad, so he began a degree in electrical engineering at Birzeit University. Because of the unrest of the first intifada, the university closed and he switched to a local college to study architecture. Next, he was awarded a scholarship to study in the Ukraine, for which he needed to learn Russian. Nonetheless, he earned his medical degree and was one of five students from a class of 150 who graduated with the Red Diploma, the equivalent of Phi Beta Kappa.

He wanted to continue and study gynecology there, but his father became ill. So newly minted Dr. Hashem returned to the Middle East to the English-language Islam Mohammad Massad Medical School in Jordan, with the intention of specializing in pediatrics. Instead, he was recruited by an American trained cardiothoracic surgeon in Ramallah and sent to Hadassah Medical Organization (HMO) for six months of training in intensive care. Now he had to learn Hebrew. While at Hadassah Hospital he learned of a prestigious residency in anesthesiology. He was chosen and later completed a sub-specialty in intensive care. A fellow Hadassah physician introduced him to his wife’s sister Liana, a PhD mathematician and school principal. They married two months after meeting, have four children and live in the Jerusalem neighborhood of Beit Hanina.

Dr. Hashem has been a key physician at Hadassah Ein Kerem for 26 years, in charge of Total Parenteral Nutrition (TPN) for patients who can’t eat. His innovative thinking resulted in a manual method of turning heavy COVID-19 patients, using mattresses and blankets, forgoing the need for electronic lifts. “The initial pictures we had of COVID-19 patients from China showed skinny patients,” he says. “We had numerous overweight patients. Turning them onto their stomachs is essential for breathing, but you also need to prevent dangerous bed sores. Our low-tech methods can now be used in resource-challenged countries like India.”

A particularly moving case for him involved a 26-year-old new mom whose baby was delivered by C-section. “The mom was in serious condition with COVID-19. Even after the C-section, we found a way to put her on her stomach, which prevented the need for a ventilator and heart-lung machine.”

He thinks back also to a 44-year-old woman who begged him to save her so her children wouldn’t be orphans. “I put her on a full-face CPAP (used for sleep apnea) and told her she had to help herself, too, by breathing into it non-stop no matter how hard it was. Thankfully, she made it.”

Surgeons tell stories of the remarkable saves Dr. Hashem has made. “In the end,” he notes, “everything I learned in my different studies was valuable.” He is also an integral part of the team doing complex back surgery without general anesthesia with Dr. Josh Schroeder and Prof. José Cohen.

Dr. Hashem concludes, “We aim to make life better for people in terrible pain when no one else will treat them. It’s easier to stand by and say there’s nothing we can do to help, but that’s not the Hadassah way.”

‍
Read more:
Learn more about how Hadassah medical teams are fighting COVID-19 and the rise of the Delta variant in Israel.