Stand Up & Spread the Light 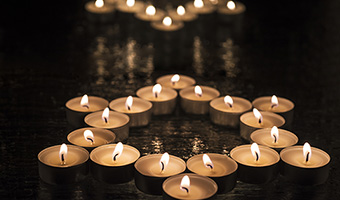 "Tonight, after we have lit the final Hanukkah candle, we must not stop spreading the light. This is the time to stand up and spread light." —National President Ellen Hershkin
Executive Director/CEO Janice Weinman

This Hanukkah, many American Jews who had never previously worried about lighting a menorah in their window found themselves facing a new fear, a fleeting thought that the candles would put their own family's safety at risk.

It has been a little more than six weeks since 11 Jews were massacred at the Tree of Life Synagogue in Pittsburgh.

In New York since then, two men were attacked in separate incidents; a Holocaust scholar found swastikas outside her office; a Jewish 9-year-old was punched; Brooklyn Union Temple was defaced with "Die, Jew Rats." At Duke University, a swastika defaced the wall above a mural dedicated to the Tree of Life victims. For some younger American Jews, these horrific acts of hate have brought home the very real threat of anti-Semitism for the first time, as the ADL reports a staggering 60% rise in the rate of such incidents.

With each Hanukkah candle we lit over the past week, we marked the determination and tenacity of the Jewish people and the defiance of the Maccabees as they reclaimed our Temple.

Last month was the 80th anniversary of Kristallnacht and this year marks 25 years since the community in Billings, Montana rallied after white supremacists threw rocks through the window of a 6-year-old child who had a menorah in his window. The local newspaper printed a menorah for everyone to hang in their windows. Billings stood by its Jewish friends then, just as last Sunday, hundreds came together to light a menorah outside the Tree of Life Synagogue. "The light is the message," Rabbi Jeffrey Myers said.

This is the time to stand up and spread light.
Hadassah, The Women's Zionist Organization of America, Inc., spreads the light 365 days a year. We are constantly invigorated by the power of hundreds of thousands of passionate members and supporters here in the US who continue the legacy of Henrietta Szold, our founder, to safeguard the health of the people of Israel.

This passion manifests itself in our two premier hospitals in Jerusalem, spreading their light with new breakthrough medical research and treatments. The hospitals treat one million patients each year regardless of race, religion or nationality.

In the United States, we spread the light from generation to generation, by leading efforts in support of national legislation to ensure future generations don't forget the crucial lessons of the Holocaust and the importance of standing up against hate. Currently, we're mobilizing our 300,000 members/supporters in every congressional district to advocate on behalf of the Never Again Education Act, legislation to provide schools with access to curriculum for students to learn about the Holocaust.

Hanukkah is the story of perseverance and tenacity and a celebration of the rededication of the Second Temple.  Hadassah is the story of empowering women to stand up bravely for our Jewish values that build a resilient and enduring community. We also rededicate ourselves to providing outstanding health care and meaningful education to sustain our Jewish future, both here in the United States and in Israel.

Tonight, after we have lit the final Hanukkah candle, we must not stop spreading the light. Let's join together — 300,000 strong — to celebrate "the miracles and the wonders" of our enduring community, forever united against hate, intolerance and divisiveness.