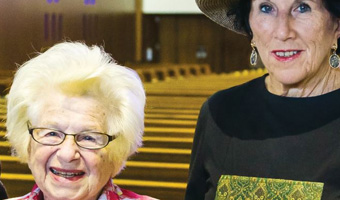 It isn’t false modesty, but the 600 men and (mostly) women in the audience have come to hear Dr. Ruth. I am, you will pardon the expression, the warmup speaker. Dr. Ruth Westheimer, 1.4 meters, age 87, with a distinctive German- Swiss-French-Israeli accent, is the world’s most famous counselor on sex.

When I accepted this gig for Hadassah months ago, I figured I would speak mostly about the superlative research in our small country, which is bringing hope to sufferers of macular degeneration, heart disease and the dreaded ALS.

I would talk to young Jewish women about the controversy surrounding tests for genetic mutations that predispose them to breast cancer.

But now there is the new wave of terrorism, and the whys of the intensity of the violence and the challenges of treating the survivors and the terrorists. Instead of describing petri dishes and clinical trials, there are patients I have met post-stabbing, and the visits by New York City Mayor Bill de Blasio and UN Secretary-General Ban Ki-moon.

Westheimer has tears in her eyes when I describe the heroic dedication of the healers and those who need healing, and I have tears in my eyes, too, as she talks – not about the subject that has surely drawn the crowd but about her 20th birthday, June 4, 1948.

Karola Ruth Siegel qualified for the 1938 children’s transport to Switzerland because her father had already been rounded up. She spent the war there, grateful to be alive but disgruntled with the training in housekeeping she received and a sadistic headmaster.

At 17, she sailed for Israel and enlisted in the Hagana. She realized that despite being short, she was a superb sniper.

One afternoon, air raid sirens went off. Ruth was in the dorm of Beit Hehalutz, home to future teachers and current fighters. Concerned that she would be stuck in the shelter for hours, she went to get the new Hebrew novel she’d received as a birthday present.

The shells caught her on the stairs going down to the shelter. A friend on the stairs was killed, and Ruth sustained serious wounds. The ambulance brought her to what was then Hadassah Hospital.

These were the months after the attack on the Hadassah medical convoy (April 13, 1948), and Hadassah Hospital was spread in buildings in downtown Jerusalem. She was healed and – this is Dr. Ruth, after all – had a romantic interlude with one of the doctors.

At 87 her legs are fine – I sprinted up after her on the carpeted stairs to the synagogue bima where we spoke and she declined any help. What twisted my heart was the similarity between back then and now, that we’re still facing hatred and threats and needing to find creative ways to bind up the wounds.

One of the concerns I hear from the women and men I’m engaging with here in the United States is the uncertainty about Israel among the younger generation, their own children and grandchildren who have grown up with Zionist role models at home. They even blame their parents for not sharing the Palestinian narrative with them.

I tell them about the story of the two boys who were patients recently at Hadassah.

One is Ahmed Manasra, 13, whom I personally saw in the Ein Kerem trauma center when he was brought in by Magen David Adom medics. At first they thought he was at least 15 or 16. As the doctors and nurses crowded around Ahmed and sent him out for a CT scan, the phones kept ringing from reporters who wanted confirmation that another patient – out of respect for the family’s privacy, we’ll call him Noam – had indeed died. Thankfully, that was a report that couldn’t be confirmed. Noam – a few months short of 13 – was alive, if barely, at Hadassah University Medical Center, on Jerusalem’s Mount Scopus, close to the scene of his stabbing in the Pisgat Ze’ev neighborhood. He was in surgery.

Detroit Jews purchased the land for Mount Scopus. They sent the first ambulance to pre-state Israel in 1918.

Ahmed, the patient at Ein Kerem, and his older cousin Hassan had left their homes in Beit Hanina for an outing to kill Jews. They had already succeeded in seriously wounding a 21-year-old when they came upon Noam and his little brother visiting their grandmother.

Noam had paused to pump air into his bike tire. He was squatting when the knife-wielding cousins came upon him.

Hassan was killed and Ahmed was injured during apprehension.

No, thank God, Noam was not dead.

He was fighting for his life.

But oddly, not Noam’s but Ahmed’s being alive became an international question.

Suddenly, millions of viewers were watching the death of Ahmed Manasra on YouTube. Faked, like the image of Muhammad al-Dura in the second intifada, he was turned into a cause célèbre by the Palestinians. Murdered. By soldiers/ settlers.

Except that he wasn’t dead. He was recovering nicely at Hadassah University Medical Center.

Unlike the story of al-Dura, this story could be debunked immediately. The bottom line is that Ahmed being alive didn’t seem to bother those promulgating the dead martyr story. We have a narrative. They have a narrative. Still, to at least some of those who question the values of the State of Israel, truth and facts must have some meaning.

This isn’t Schrödinger’s cat which can be alive and dead at the same time.

My Israel phone rang while I was in the US. On the other end was someone who identified himself as a representative of a human rights organization investigating the death of children in the current conflict. He asked me about a teen killed in Hebron – someone (he admitted when I pressed) who was killed while (allegedly – his word) trying to stab someone. I guess he wanted to check to make sure the youth in question wouldn’t pop up in Hadassah.

I asked for the request in writing but haven’t received it yet.

Audience members had a chance to ask Dr. Ruth questions. Sorry – you’ll have to buy her book to get the answers. It’s called The Doctor Is In and it’s mostly about joie de vivre. For all she’s been through, she embraces optimism and joy.

Her parting image: She collects turtles, though she warns the audience not to send her more at this stage in her life.

She likes turtles because they’re always ready to go – carrying their houses with them. However, for a turtle to survive he has to occasionally stick his neck out and take risks.

“Taking risks is part of embracing joie de vivre,” she says. “There are good times to be had out there, but often you have to go looking for them.”