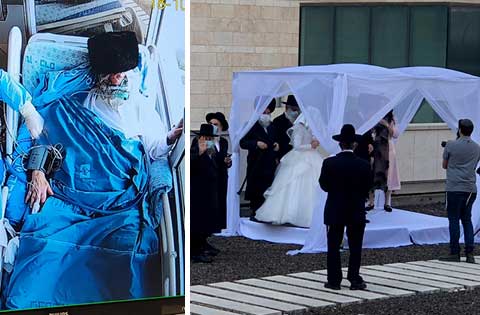 Update: Four weeks after witnessing his son’s wedding from his COVID-19 Outbreak Unit, the father has recovered sufficiently to be able to go home. Head Nurse Noa Ragones relates, “His condition was very serious, but since the wedding, it has stabilized, and he has been steadily improving. The staff continued to care for him devotedly. He will now continue to get back his strength at home.”

The family is ecstatic about their two reasons to rejoice: the son's wedding and the father's recovery.

The groom's father, Avraham Hamitzky, from Arad, had already been in the COVID-19 Outbreak Unit at Hadassah Hospital Ein Kerem for three weeks. He was in serious condition with difficulty breathing.

His son, age 20, and bride, age 18, who are Gur Hassidim, asked for a special favor. Could they hold their wedding outdoors at Hadassah Ein Kerem and have the ailing father present? They forwarded their request through Yad Avraham, the Hassidic organization that works with the Hadassah Medical Organization.

Remember that large weddings are among the notorious hotspots for spreading the coronavirus. When HMO officials assured them it could happen, no one knew that this weddingwould catch the eye of newspapers from The Washington Post to the Indian Hindustan Times, from cities like “wedding-central” Las Vegas, Brooklyn and chilly Calgary.

Imagine standing on a balcony off the third-floor roof of EinKerem’s Round Building overlooking a large outdoor space on the second-floor roof. Singer Mendi Weiss and his keyboardist are filling the campus with Hassidic niggunim (melodies).Picture the courtyard bordered by the Round Building with the 5th-floor COVID-19 unit, the tall Sarah Wetsman Davidson Hospital Tower and the HMO helipad.

The hospital carpenter had been summoned earlier to the COVID-19 unit to take the locks off the window. Head nurse Noa Perkel Ragones and her team blew up yellow, orange, green and pink balloons and attached them to the outside windowsill. Hamitzky's bed was wheeled to the window.

“He declined our offer to change his pajamas for more festive clothing,” said Ragones, a graduate of the Henrietta Szold Hadassah-Hebrew University School of Nursing. “He said he'd concentrate on his breathing.”

The ebullient bride sat in a secluded covered causeway, greeting the few family members and praying. In the courtyardthe groom was helped into in a white robe and a high cylindrical fur hat called a spodik. Everyone was masked.

The groom entered the causeway where the bride sat for the traditional bedecken. The bride, her face covered with an opaque white veil, was led to the chuppah and, holding onto her mother and mother-in-law to be, circled the groom seven times. The ceremony was short and simple: the wedding vow, the seven blessings, the breaking of the glass.

Only 20 persons are allowed at an outdoor wedding under Ministry of Health guidelines. There were 18 guests plus the bride and groom. One of the guests took the microphone and sang a personalized ballad with prayers for the happiness of the couple, for Hamitzky's recovery and for the staff of Hadassah. Photographers launched a picture-taking drone.

And what about the Mitzvah tantz, the Hasidic custom of men dancing before the bride, who remains still while distinguished members of the wedding party hold the end of a gartel, the rope belt worn by Hasidic men?

From the fifth floor a long rope of gartels came flying out of the window. It took the volunteer two tries to reach the bride,who grasped it. The dance is usually a highly charged emotional moment, where the dancer prays silently for the couple's success in life. This subdued dance had its own special charge.

In his bed the groom’s father, wearing pjs and spodik and praying quietly, was alight with joy.

“He was very sick but the wedding seemed to elicit untapped energy in him,” said Ragones. “He’s doing better.”

There were, indeed, only 18 invited guests, but that doesn’t include the hundreds of patients and staff members in the Davidson Hospital Tower who were transfixed by the ceremony. There wasn’t a dry eye among them.