What Are Organoids? Welcome to a Revolution in Basic Medical Science 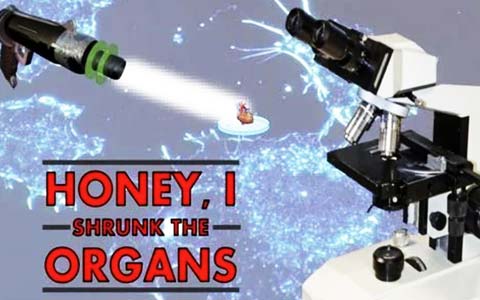 Classically, researchers in basic medical science have had  two tools: in vitro cultures and animal models. The challenges posed by  their limitations are many. Cells taken out of the human body and grown  in a petri dish won’t behave exactly as they do within a real organ of  the body. Animal models are not as highly complex as the human body, and  they cannot capture the heterogeneity of human beings.

Today,  however, basic science research is experiencing a revolution with the  creation of organoids, 3D miniature cellular and functional replicas of  our bodily organs. Organoids, grown from a tiny biopsy of cells from a  patient, encompass the heterogeneity of the human organ and reveal the  interaction of the cells with one another.

“Now, we  have the closest model to the real thing, which enables us to study  human disease in the best way,” explained Myriam Grunewald, PhD, head of  the Hadassah Medical Organization’s newly established Organoid Center  within Hadassah’s Wohl Institute for Translational Medicine. Dr.  Grunewald shared the above explanation of classical medical science  research and the significance of this revolution during the webinar  “Honey, I Shrunk the Organs,” episode four of Hadassah International’s  series “50 Shades of Health: A Journey Into the Future of Medicine.”

Dr.Liron Birimberg-Schwartz, medical director of the Organoid Center, and  pediatric pulmonologist Dr.Alex Gileles-Hillel joined Dr. Grunewald in  describing how organoids, in mimicking human organs, have the potential to enable physicians to better treat a patient with targeted therapy. Dr. Birimberg-Schwartz explained that, in the 1980s, a cystic fibrosis (CF) genetic mutation was discovered that causes a protein to  malfunction, leading to a buildup of thick mucus, which, in turn, causes  breathing difficulties and lung infections. Medicines were developed to  treat the condition, but the drugs did not work on all patients. While  doing a fellowship in Toronto, Canada, Dr. Birimberg-Schwartz recalls,  she had a very ill CF patient for whom none of the current medicines  were any help. Using organoid technology, she and her colleagues tested  different drug combinations and discovered one that restored the  patient’s protein function. “I understood then how significant this  research is and how much we can affect patient outcomes,” she said. “I  kept thinking that we have to do this faster.”

Dr. Gileles-Hillel, in his webinar presentation, explained that “an organoid  is a versatile platform for replicating lung disorders.” In  collaboration with Dr. Hans Clevers of the Hubrecht Institute, Royal  Netherlands Academy of Arts and Sciences, he is using organoids to  investigate the different ways that movement of the cilia, the fine  cleansing hairs in our airways, is compromised in CF, so that the cilia  can’t move mucus and pollutants out of the lungs. Once the organoids  illuminate how cilia from a particular patient are functioning, the goal  is to determine what will make them function more efficiently, Dr.  Gileles-Hillel noted.

Dr. Clevers, the first to  identify living adult stem cells in the intestines, used them to develop  the first organoid. Perhaps one of the most fascinating elements of the  organoid discovery is that with one adult stem cell a scientist can not  only develop a fully grown miniature organ that mimics the actual human  organ but also, as Dr. Birimberg-Schwartz noted, create an unlimited  number of organoids. As long as an organ has adult stem cells, that  organ can be recreated in an organoid. Furthermore, “these organoids  begin to develop in a day or two,” she said.

“Depending  on the complexity of the experiment, scientists will have enough cells  for their research either within weeks or in a month or two.”

Dr.Grunewald and her colleagues are now establishing a bank of organoids  representing different organs and individuals with a variety of genetic  backgrounds. The goal is to capture as many diseases as possible, she  noted. Each organoid is frozen and then, on demand, can be defrosted and  used to either answer a basic scientific question—how bacteria in the  gut triggers formation of tumor cells, for example—or to help a  physician decide which drug to give a patient to achieve the best  outcome.

As Dr. Birimberg-Schwartz reported, using  organoid technology, researchers can test 120 drugs or drug combinations  at a time and then tell the clinician, “This is the drug regimen I  recommend you try first.”

What next? A few years down  the road, it’s likely that organoids will be used not only for  information but also to heal organs. An intestinal organoid, for  example, replete with regenerating adult stem cells, may be re-implanted  into a patient, locate the site of a lesion, and repair it. Organoid  technology is clearly racing forward.