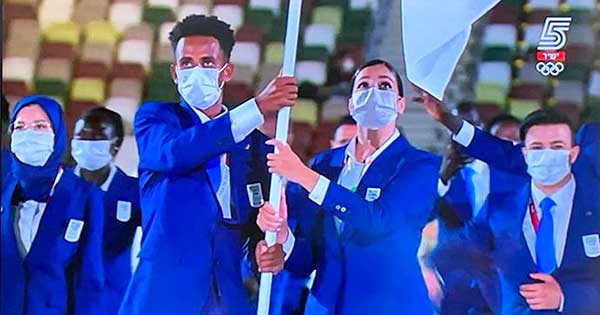 Update: On August 8, Louis finished in 16th place in the marathon at the 2020 Tokyo Olympics. At 23 years old, he is now among the 20 best marathon runners in the world.

Tachlowini “Louis” Gabriyesos — one of Hadassah’s own Youth Aliyah graduates — has achieved his longtime dream of being an Olympian. After years of training as a marathon runner, Louis is one of 29 athletes at the Tokyo Olympics of the International Olympic Committee (IOC) Refugee Olympic Team. During the Opening Ceremonies, he stood tall as one of two flag-bearers for his team.

“The Olympics is my dream as a professional athlete,” said Louis during an interview with World Athletics, adding, “I want to show others that everything is possible and they shouldn't give up."

At the age of 12, Louis fled Eritrea, his home country, to avoid conscription in the Eritrean army, embarking on a treacherous journey on foot across the Sudan and Egypt until he reached Israel. Israeli border guards placed Louis in a detention center, where he met Natan Biton, former general manager of the Hadassah Neurim Youth Aliyah Village, who agreed to enroll Louis as a student at the youth village.

Hadassah-supported Youth Aliyah villages have a long history of providing refuge to young immigrants like Louis. With the unwavering support of teachers and staff, Louis studied, learned Hebrew and received first-rate athletic training as a marathon runner on a state-of-the-art track with professional coaches and a comprehensive training routine.

Soon, Louis proved himself to be one of Israel’s top runners. In March 2021, Louis became the first refugee to clock a qualifying time for the Tokyo Olympic Games after running a 2:10:55 marathon at Hula Lake Park in Israel. It was only the second time Louis had officially competed at that distance.

Louis was recently featured in a Haaretz article, "Tokyo Olympics: They Consider Themselves Israelis – but They're Representing the Refugee Olympic Team," that sheds light on the struggles Louis and other Eritrean refugees have faced and why they're proud to call themselves Israelis. On August 8, Louis will join his fellow runners at the Olympic stadium to compete in the marathon — at last, achieving his Olympic dream and inspiring others, especially young refugees, that "everything is possible."

A poignant message on Hadassah Neurim's Facebook page celebrates Louis's incredible accomplishments, his dedication to the youth village and his love for Israel:

‍"Louis is a role model for all the students and staff. His determination, perseverance and excellence provide a personal example to us all. He takes part in activities in the village and is committed and grateful to the State of Israel and the Hadassah youth village, which is a real home for him. He appreciates the opportunity to live in our village and country and everyone here is excited along with him."

Learn more:
Read more about Louis's extraordinary journey — from refugee to top athlete — in this story written by Barbara Sofer, Director of Public Relations, Hadassah Office in Israel.
Listen to this inspiring podcast about Israeli youth: The Branch: It Takes a Village.
Learn more about Hadassah-supported Youth Aliyah villages in Israel.