Journalist Jane Eisner was the first female editor-in-chief of The Forward, one of the country’s top Jewish newspapers — a position she held for more than a decade. In this episode of Hadassah Presents: Women of Vision, Eisner speaks with Hadassah CEO Janice Weinman about rising through the ranks of journalism as a woman, the differences between working in mainstream and Jewish media and her advice to young journalists who want to break into the field. 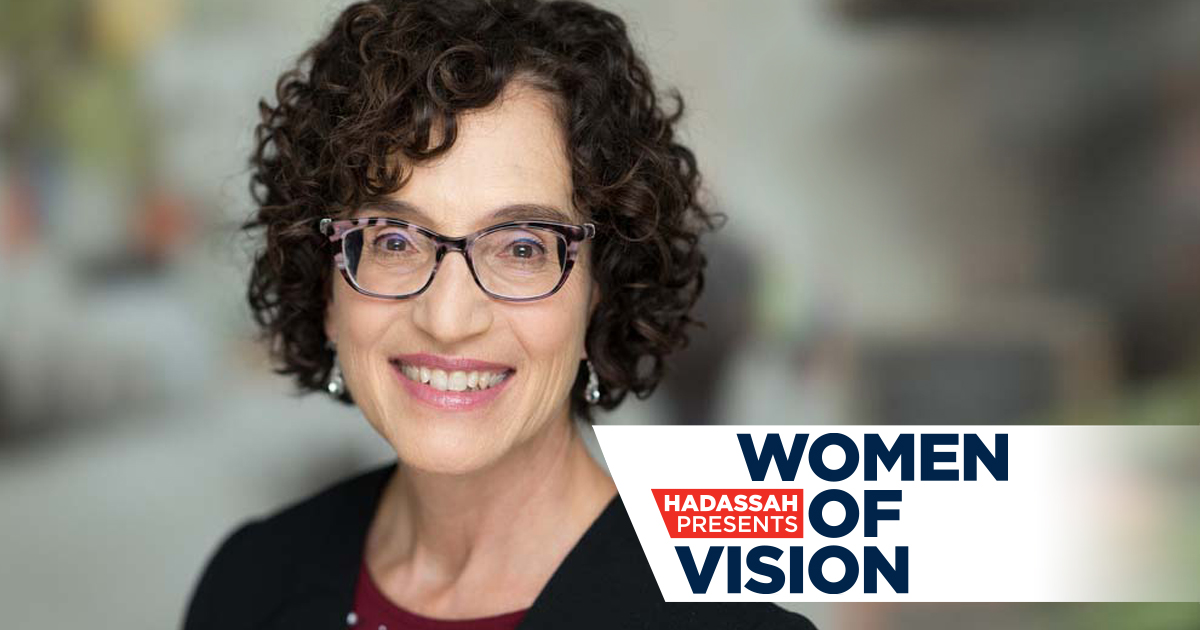 Hadassah Presents: Women of Vision airs on TalkLine with Zev Brenner, the flagship program of TalkLine Network. Listen to the show at hadassah.org/radio and, in the New York Metropolitan Area, on WSNR 620 AM Radio.

Jane Eisner is an accomplished journalist, educator, non-profit leader and public speaker who is currently director of academic affairs at the Graduate School of Journalism at Columbia University, overseeing the Masters of Arts program.

For more than a decade, she was The Forward’s editor-in-chief, the first woman to hold the position at America’s foremost national Jewish news organization.

Since Eisner joined The Forward in 2008, the publication dramatically expanded its digital reach, becoming the authoritative source of news, opinion, arts and culture in the Jewish world. The publication won numerous regional and national awards, and her editorials were repeatedly honored by the Society of Professional Journalists and other media organizations. She is known for her interviews of such notable figures as President Barack Obama, Justice Ruth Bader Ginsburg, Prime Minister Benjamin Netanyahu, President Reuven Rivlin and many others.

Prior to her work at the Forward, Eisner held executive editorial and news positions at The Philadelphia Inquirer for 25 years, including stints as editorial page editor, syndicated columnist, City Hall bureau chief and foreign correspondent. From 2006 to 2008, she served as vice president of the National Constitution Center. She has taught at Wesleyan University as the first Koeppel Fellow and at the University of Pennsylvania, where she is a senior fellow at Penn’s Program for Research and Religion in Urban Civil Society.

Eisner is the author of Taking Back the Vote: Getting American Youth Involved in Our Democracy, published in 2004 by Beacon Press. She is a regular contributor to The Washington Post’s Book World, and has written for Columbia Journalism Review, The Los Angeles Times, TIME, NPR and other major news outlets.

She is the immediate past chair of the board of the Student Press Law Center and a member of the Council on Foreign Relations, the Refugee Employment Partnership and the Institute for Jewish Spirituality Advisory Council.

Eisner is a graduate of Wesleyan University and the Columbia Journalism School. She was a fellow of the Katharine Houghton Hepburn Center at Bryn Mawr College in its inaugural year and participated in the Sulzberger Executive Leadership Program in 2009. She is a frequent public speaker and moderator.

She lives in New York City with her husband, Dr. Mark Berger.

‍Dr. Janice Weinman has nearly 50 years of experience and accomplishments in the not-for-profit and government sectors. In addition to almost a decade as Hadassah’s CEO/Executive Director, she served as President of K.I.D.S., an organization supporting millions of children in need around the world; Corporate Vice President for External Affairs of The Mount Sinai Hospital/NYU Medical Center and Health System in New York City; Executive Director and CEO of the American Association of University Women; and Executive Vice President of the College Board. She was the assistant to the United States Secretary of Education in both the Carter and Clinton administrations and has held professional and volunteer positions at a variety of civic organizations. Dr. Weinman earned an EdD and an MA from Harvard University and a BA from Brandeis University.