Parkinson's Disease: Surprising New Treatments and The Race For a Cure

While doctors do not know exactly what causes Parkinson's disease (PD), it is a disease that cripples almost one percent of the population. The number of people with PD is expected to be over 12 million by 2040. In this episode, listen as Professor Dana Ekstein, Chair of the Department of Neurology and Co-Director of the Epilepsy Center at Hadassah hospital and Dr. David Arkadir, Hadassah Senior Neurologist, specializing in Parkinson’s disease and Movement Disorders discuss how Israel searches for a cure. 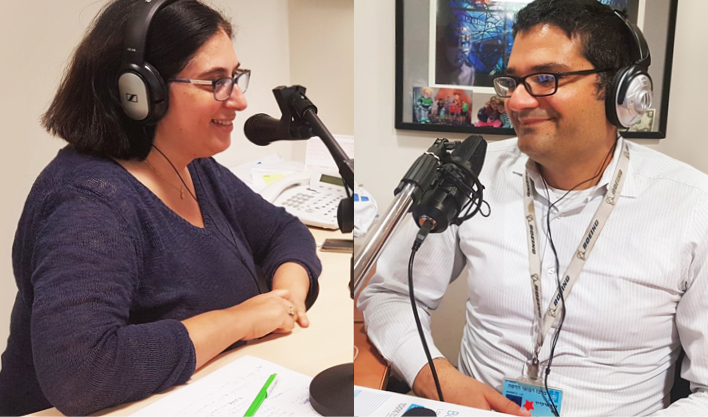 Dr. Dana Ekstein is the Chair of the Department of  Neurology and the co-director of the Epilepsy Center at Hadassah  Hospital. She received her MD and PhD degrees from the Hebrew  University and Hadassah Faculty of Medicine, and then completed  training on Neurology at Hadassah Hospital and fellowship in epilepsy at  Beth Israel Deaconess Medical Center and Harvard University.

Dr. David Arkadir is a Senior  Neurologist, specializing in Parkinson's disease and other Movement  Disorders.  He received both his M.D. and Ph.D. from Hadassah Hebrew  University Medical School, competed his training as general neurologist  at Hadassah Hospital and a clinical fellowship in Parkinson's and other  movement disorders at Columbia University Medical Center in New York  City.

They're just a few of the notable names who've been diagnosed with Parkinson's Disease.  Over the years, Fox and other celebrities have helped bring much-needed attention to this debilitating illness. Beyond a cursory knowledge of the symptoms, we  still know so little about Parkinson's, a disease that affects 10 million people around the world. In America alone, 60,000 people are diagnosed with the disease each year. So this month's episode of Hadassah On Call will explore the topic with two of the leading  doctors in the field, Dr. Dana Ekstein and Dr. David Arkadir, who've spent nearly their entire careers leading the neurology department at Hadassah.

While tremors are often an early sign of Parkinson’s, they're by no means the only symptom. "About 15 to 20% of patients with Parkinson's Disease will never develop tremors. So it's not the equation that tremor equal Parkinson's," explained Dr. Arkadir. "Some people with Parkinson's will never have a tremor." Instead, some patients may experience a loss of smell or depression, and some spontaneously shout or act out their dreams.

Dr. Ekstein is encouraged by the wealth of research about Parkinson's being done at Hadassah. "I think we are on the edge of a very exciting era when we'll have much better treatments, and maybe prevention for some of the cognitive issues that we see in neurology." Among other treatments, Ekstein and her colleagues are focusing on involve stem cell therapy and deep brain stimulation.

One particular peer-reviewed study led to stunning results. Partnering with Microsoft, Hadassah doctors discovered that they were often able to diagnose Parkinson's simply by looking at the way people seeking information about the disease typed on their keyboards and moved their mouse. "In some cases, the patient might not even know he has the disease, but we can detect he has the disease," Arkadir said.

It's research like this that gives both  doctors hope for the future. "I've been at Hadassah for 30 years, and my hope comes from the fact that I can see such a fast development of research, science and treatment in neurology," Dr. Ekstein told us. "We really know much more about how to treat our patients better today than how we treated them just 10 or 20 years ago. I can see how new scientific findings lead to new treatments for them, and I think the next one or two decades will be really exciting in our profession."

"Hadassah On Call: New Frontiers in Medicine" is a production of Hadassah, The Women's Zionist Organization of America. Hadassah enhances the health of people around the world through medical education, care and research innovations at the Hadassah Medical Organization. For more information on the latest advances in medicine please to hadassah.org.

Subscribe to our podcast on iTunes, Google Play, or your favorite podcast app. If you haven't already, please leave us a review on the iTunes store. It only takes a minute and when you do it helps others discoverr "Hadassah on Call."

The show is hosted by Benyamin Cohen and edited by Skyler Inman and the team at the Hadassah offices in both New York and Israel.

The Branch
This podcast offers a glimpse into the everyday lives of Jews and Arabs in Israel forging meaningful relationships. Presented by Hadassah and hosted by Dina Kraft, "The Branch" shines a light on the stories of people living the example of a shared society. Together. Even though it’s complicated.hadassah.org/thebranch

Also, we're looking to you our listeners, for which medical experts you'd like to hear from in the weeks ahead on this podcast. Please let us know by sending an email to us at marketing@hadassah.org.