From each side of the Israel-Gaza border, two peace advocates – Rami and Roni -- organize via Skype and WhatsApp, convinced that people-to-people ties can help break the deadlock of decades of cross-border fighting. 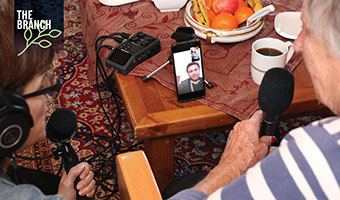 When I first contact Rami Aman he’s pacing in a room in Jordan, frustrated to find himself caught in travel limbo. He’s a peace activist back home, in the Gaza Strip, one with a fervent belief that connecting with Israelis will help lead to a different future.

But in Gaza, advertising you have Israeli friends can land you in jail as Rami has experienced first-hand. In June he was interrogated and held for 17 days in a Hamas prison for his work partnering with Israelis to organize a joint bike ride for peace and freedom along both sides of the Israel-Gaza border.

It was most likely because of Rami’s peace activism that he was granted a very rare travel permit by Israel for a resident of Gaza to visit inside Israel. The few Gazans allowed inside Israel are usually only permitted entry for medical visits to Israeli hospitals, including Hadassah hospitals in Jerusalem.

But on Rami’s way back home to Gaza, through Jordan, he’s not being allowed to use it. No reason has been given by Israeli authorities, he says, just a firm “no” every time he tries. He’s determined to meet with Israeli counterparts he knows from Skype calls and text messages, but this time in person.

His first call when he was blocked from crossing into Israel was to his Israeli friend, Roni Keidar, a partner in his peace and outreach efforts.

In her calls and letters to Israeli authorities pleading to let Rami in, she tells them, “This is a man we need to encourage.… We have to give him the chance to make an influence, to have an impact. Let's not think of Rami and the Palestinians in Gaza. Let's think of ourselves for a moment. It's for us we need people like Rami. I don't want to crush his efforts down. I don't want to make him stop believing because he believes now, I know he does.”

At 75, Roni is a generation older than Rami – and he says she’s like a mother to him even though most of their contact in two years of knowing each other has been by Skype or texting. Roni lives in an agricultural village along the border with Gaza. She is a retired educator whose family immigrated to Israel in 1950 when it was a brand-new country.

She has endured two decades of alerts and rocket barrages, including ones that killed her daughter’s best friend and her husband’s worker. But she has emerged more determined than ever to try to build peace from the ground up, by befriending Gazans like Rami.

“Zionist, left, right, I don’t care about the labels. I just care about meeting the people,” says Rami.

It was in 2009 after the first war between Hamas, the Islamic militant group that rules Gaza, and Israel that Rami decided he too had seen enough loss and upheaval. He lost several close friends, he says, in that war. All civilians, he says, who were no part of the violence until it claimed their lives.

In 2010 he founded the Gaza Youth Committee, an attempt to find a grassroots way out of the conflict. Part of what they do is to connect with Israeli counterparts, many of them, like Roni, members of an organization called Other Voice. They live in southern Israel, which has borne the brunt of the cross-border fighting, much of it they say wreaked on innocent civilians on both sides. They believe contact between Gazans and Israelis will eventually help bring an end to the fighting.

At the beginning of his trip to India he was able to use his permit to visit Israel very briefly en route to catch his flight from Jordan. Waiting to pick him up at the border was Roni. It was the first time the two met.

Roni says that, after befriending one another across a distance both so small and yet so unbridgeable, finally meeting one another was an incredible experience.

“But I so wanted you to come back again. And we all wanted to see you at the lighthouse,” she tells Rami in a WhatsApp call the day I visit her home, referring to a gathering spot where “Other Voice” members and others meet every Friday and Skype their friends in Gaza.

“We have one chair that we keep open for you,” says Roni. “It’s Rami’s chair.”

Go behind-the-scenes with host Dina Kraft: check out these photos from episode 17!